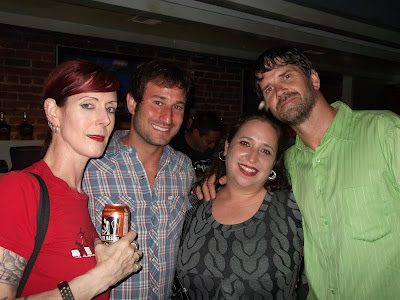 Last week I posted about the week leading up to my birthday and if I recall correctly, I wrote it the afternoon of my actual birthday, so there was still more celebrating to come. I know it comes off as completely narcissistic that I drag my birthday out as long as I do, but I guess in my world, everyday can seem like a celebration. Believe me, I don't take that for granted, ever, and I worked really hard to get where I am, with major obstructions, frustrations, sleep-deprivation, and heartache along the way. I still have a long way to go, but I'm just feeling like I'm in a good place and I'll continue to share these adventures  as they come, in whatever form they come in, even if at the moment they're in nauseating double-rainbow happiness gushing wonderment. If you can stand it, after the jump.

I guess I'll start by posting some of the pictures from Thursday night at the Propagandist since they were on Darren's camera so I didn't have them when I wrote that other post.


Kicking things off on Friday, Darren dropped me off downtown so I could check out the San Diego Film Festival which was hosting an "Almost Famous Block Party". I had attempted to pick up my credentials on Wednesday and Thursday when I stayed downtown but kept missing the publicist, so we finally connected on Friday. I feel like the timing is pretty unfortunate since that last weekend of September is always packed with things in San Diego, my birthday notwithstanding. Basically that's my way of saying thanks for the Peroni in the VIP section but I didn't get to see a single film.

There was this little lounge area on the 3rd floor of the Reading Theatre so I didn't intend to stay there but I got to chatting with a guy and it didn't appear that we were missing much on the street below. I do regret missing Silver Linings Playbook with Bradley Cooper and Robert DeNiro because it's getting rave reviews, but my timing was just a little off. Elliott came down to meet me and by the time we made it to the block party, there was a cover band performing so we left. We walked over to Urban Bar & Grill which has a great (and cheap) late night happy hour from 9pm to close, but mostly we were there to see Jesse LaMonaca who plays there  on Fridays somewhat regularly. He wished me a happy birthday and played "Meteorite Shower" for me, and then bought me a birthday shot. For everything else that happened that night, I blame that shot. 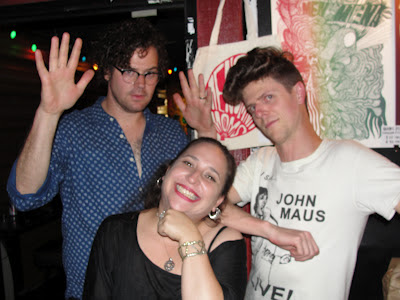 I don't really need to get into the rest of the night- Elliott and I went to the Casbah where Menomena and PVT played. Super fun show. Perhaps too much fun. After that I may or may not have gone to Eleven? And once Darren was off work, I may or may not have wrapped a birthday present, had a crying meltdown (because it's not a birthday until you cry), sang and even more embarrassingly, acted out THREE Madonna songs, and got confronted on the street by some crazy freak who was bleeding from the face and yelling at Darren that he better take care of me and attempting to fight him while simultaneously trying to hit on me. 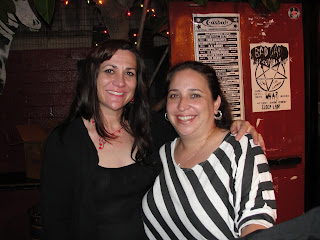 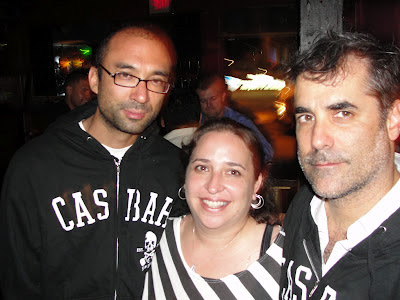 On Saturday, there was no motivating to get to Tour de Fat. I slept off the night before until my mom came over and we walked to the Adams Avenue Street Fair. I feel bad that I really didn't see many bands, but by the time we walked the whole festival (indulging in those amazing dutch cookies with the caramel smeared inside and later some freshly made loaded potato chips) I had to get home and get ready for work. I did bring home a "BBQ Parfait" that was delicious and enough food to share with D before he dropped me at the Casbah, where I was doing merch for Devotchka. That was an amazing show and everyone in the band was great and the tour manager was super cool which made for a pretty easy night.

After running around all week, it was nice not to have to be anywhere in particular come Sunday. In the afternoon, Darren and I walked to Adams Avenue long enough to walk one lap before he was off to work and I headed home to get ready for the Shins, which I already wrote about here.

And so, with the end of September, so goes the end of my birthday, and I've already gotten right into the rhythm of October. I love this month, and recently it occurred to me that it is a month of anniversaries. For one, I was notified that  joined Twitter on October 1, 2007. This is worth mentioning because a year later, on October 11, I was fired from my advertising job, probably partially because of twitter. I guess I can say because of the focus I put on this site (which I launched Nov 5, 2006 and will be celebrating at the Casbah on November 15) I became a contributor to NBC SoundDiego and working for the Casbah, where I've been for three years and just got a little promotion. As Tim Mays put it, "you're big-time now." I certainly never thought when I joined Twitter that one day it would be my job.

So yeah, October. Casbah on Monday was lightly attended but a good show with The Jezabels and Yukon Blonde, and last night was great with Wolf Gang, The Royal Concept, and Frank & Derol. Today I went on a nice bike ride by the bay and and am now throwing rocks at my TV as I watch the presidential debate waiting to go to Spreckels. Once again, thanks to everyone who was a part of my birthday. I'll try and chill out on the rainbows & unicorns.
Posted by Rosemary Bystrak at Wednesday, October 03, 2012