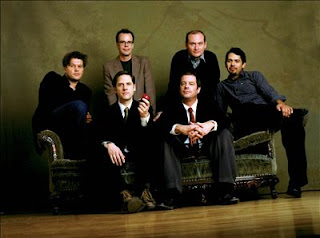 Few bands evoke the sounds of the desert Southwest better than Tucson-based collective Calexico. Joey Burns (guitar, vocals) and John Convertino (drums) formed the band over 15 years ago. Many styles comprise the sound the band is noted for, including Latin, country, jazz, and Americana to name a few. My overall impression is that of an Ennio Morricone soundtrack. In fact Calexico has written several film soundtracks. Addition of a horn section many years ago has created a more distinct orchestral sound. One of the first Casbah shows I witnessed featured Calexico as the headliner. Playing on the bigger stage at the Belly Up Tavern is an ideal venue to watch the band perform. This show will feature songs from Calexico's latest release, Algiers, as well as fan favorites from previous releases. Algiers was recorded in New Orleans and features songs that remind the listener just how far the band has traveled. The journey is still ongoing and if you have not seen this band before, now is the perfect opportunity to catch them in Solana Beach. A great way to get an early start on the weekend.

The Dodos set the stage.

Watch a video of  Splitter below.