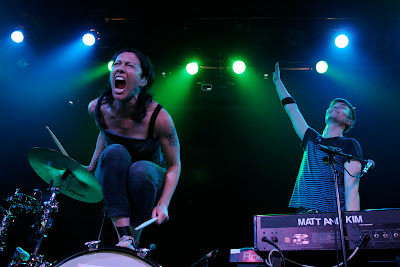 This Wednesday night the House of Blues plays hosts to Brooklyn- based firecracker Matt & Kim.  Notorious for their imminently entertaining live shows, the indie rock duet brings a tenacious stage presence and exceptional musicianship along wherever they find themselves.  Playing in benefit of the recently released Lightning, Wednesday's show guarantees a high-energy set of danceable music to match their outstanding light show and intense performance.

More from their press release:

After blowing out New Year's Eve at NYC's Hammerstein Ballroom, Matt and Kim wrapped nearly two years of headlining and selling out their biggest venues yet, while making waves with festival appearances around the world. Matt and Kim set out to write and record their newest lp LIGHTNING. With their high energy shows very much in mind, the indie dance duo wrote a true-to-Matt-and-Kim-style album with Lightning and are beyond anxious to hit the stage and share live versions with their fans. There will be plenty to dance to and shout along with when the latest songs, as well familiar crowd favorites, are brought to life in an all-new stage show.
Posted by Nate Vandermeulen at Monday, October 22, 2012