Grouplove and Alt-J @ Humphreys Concerts By the Bay tomorrow, October 3, 2012 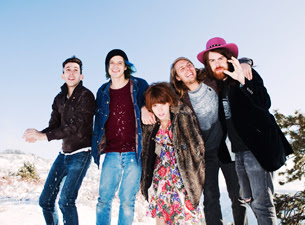 Tomorrow, October 3rd Grouplove make their return to San Diego at Humphreys Concerts By the Bay, show time 7:30 pm (tickets), with Alt-J as support.  If you were lucky enough to see Grouplove on the 91x Halloween Boo's Cruise or at Porter's Pub then you know the type of high energy the LA based quintet bring to their live shows.  If you were not able to attend  those shows make sure you do not miss Grouplove at one of San Diego's best outdoor concert venues.  Grouplove is touring their critically acclaimed debut album "Never Trust A Happy Song" a solid album including hit songs Tongue Tied, Itchin On A Photograph and my favorites Colours and Lovely Cup.  To learn more about Grouplove below is a recent in studio performance by Grouplove performed for YouTube including a Q&A.

Make sure to get to the show early to check out Alt-J who just released their debut album titled "An Awesome Wave" recorded with the great producer Charlie Andrew.  "An Awesome Wave" is a diverse alt-pop album which has received great reviews from NME, BBC, The New York Times, and Brooklyn Vegan.  I am excited to see how their electronic/psychedelic/pop/folk sound translates from album to live concert.  Click the link and give a listen to Alt-J's An Awesome Wave before checking them out before Grouplove.
Photo by Jory Cordy

Again make sure to get your tickets in advance here