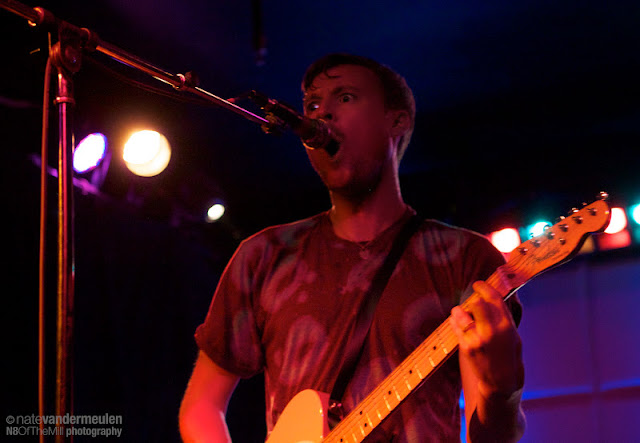 The UK's newest buzz band Django Django lit up (figuratively speaking) The Echo's stage in Los Angeles a couple weeks ago with a small bit of help from supporting acts Vinyl Williams and HOTT MT.  More words and pix below...

My trips to LA are relatively few and far between, mostly on the condition of not being the biggest fan of our big brother to the north.  Mid-week trips are even fewer, but when a big time up-and-comer like Django Django comes through SoCal without a trip to SD and tickets are offered to you, exceptions will be made.  Photo pass to the show seals the deal.  After miraculously defying the omnipresent traffic, a few hours at a nearby hot spot and tolerating an unnecessarily long wait outside the venue, access was granted into what could easily be called LA's version of the Casbah.  The ceilings are higher and the stage is (poorly) backlit instead of from the front, but once the music started it felt like being at our little jewel on Kettner & Laurel.  Local ? band HOTT MT kicked off the evening with a short set of ? music.  Highlighted by a mask-wearing guitarist, a bouncy hot mess of a frontwoman and a legitimately talented multi-instrumentalist, their set was played in near darkness to a passively interested crowd, most of whom had arrived early if only to get a spot for the headliners.  Vinyl Williams followed with a set of drone pop that kept some of the capacity crowd entertained as the lighting levels somehow dropped to even lower levels than they had been at for the opener.  While musically the LA-based five piece kept things interesting, lead singer Lionel Williams' vocals were lost completely from the first song on.  On first impressions this was a result of the venue's marginal sound system, but upon closer examination it was clear that he would likely have been able to enunciate properly by simply removing the microphone from inside of his mouth.  To each artist their own...

I had been introduced to Django Django earlier this year at Coachella by a European friend who had caught on to them as they were making a name for themselves with a continent-wide tour in benefit of their exceptional self-titled debut album.  While difficult to approach at first listen, their extremely unique blend of vocal harmonies- heavy experimental psych rock becomes addictive once you wrap your head around exactly what they are putting out there.  It was apparent that the buzz had crossed the pond as most of those at the sold out show were singing along word for word with each of the as-of-recently Mercury Prize nominated artists' songs.  To be able to duplicate the sound of your studio album in a live setting is difficult for a seasoned touring band.  To do so with such a distinctive sound during your first North American tour is the sign of something special, and it wasn't just a matter of a straight delivery of the music; instead of resorting to the sounds they had undoubtedly practiced endlessly, they took the music to a higher level.  The tempo was quickened, the beats more layered, the vocals emphasized, the drops heavier.  Adding to the energy was their clearly evident enthusiasm for doing what they love doing in one of the hot spots of the musical universe.  While they were only able to sample from a single album, the show extended to around 90 minutes courtesy of a healthy dose of extended tracks, authentic crowd interaction and a few moments of 'this is fucking incredible I need a breath' awe.  Look for them back in this part of the country very soon, likely blowing the doors off a venue like Belly Up or 4th and B. 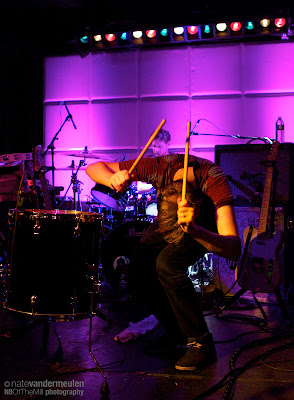 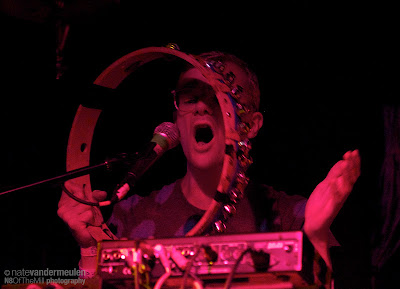 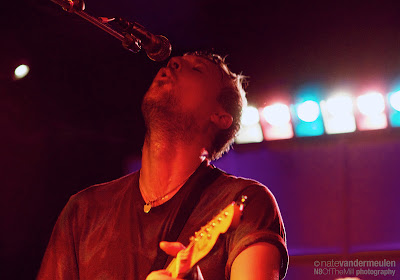 For more photos from the evening click here and for more concert photography, here.