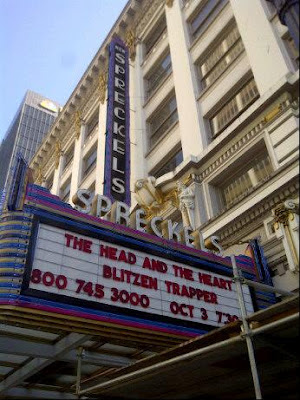 I am exploding with happiness for a whole lot of reasons lately, but at this moment specifically, it's because I am so looking forward to tonight. The Casbah is presenting an incredible lineup with The Head and The Heart, Blitzen Trapper, and Bryan John Appleby. I have seen the co-headliners many times, but earlier this summer had the chance to see both of them in the same week. Jeff and I traveled to Santa Ana to see The Head and the Heart at the Observatory and two days later, we drove to the desert to see Blitzen Trapper at Pappy and Harriet's. Believe me, individually the bands warrant the $30 ticket price, but getting to see them together, along with Bryan John Appleby, at the beautiful Spreckels Theatre will certainly make for a great night. There are still plenty of tickets available and you can avoid most of the service charges by buying directly from the box office.

For the show tonight, doors are at 7pm with the first act starting promptly at 7:30. I'll tweet exact set times when I get them, but I'd suggest getting downtown early because there's a ton of construction on and around Broadway so parking might be a little challenging. This is an all-ages show, so bring the kiddos for some real music.

These are my video playlists from those early-summer shows.