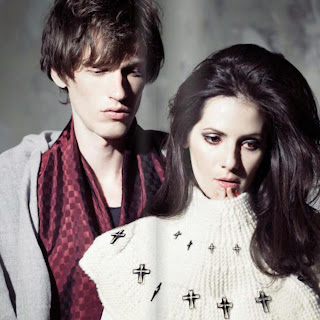 The seemingly nonstop parade of touring bands visiting our beautiful seaside city continues tonight with Brooklyn-based Exitmusic playing at Soda Bar. Devon Church and Aleksa Palladino are partners in both the group and in life (married). To say that the duo have been busy would be putting it mildly, since Aleksa is also an accomplished actress, having recently appeared in HBO's Boardwalk Empire. The balancing act between the two professions can be a delicate one, but one that has only strengthened the resolve shown in their music. Touring around the globe to promote Exitmusic's latest full length, Passage, is part of the process. The music is very immediate, with dreamy pop and heavy almost goth like undertones. There is a lot of contrast evident in the music, with Aleksa's pulsating vocal delivery at the forefront. Two other members have been added for live performances. I urge those who are on the fence to head over to the City Heights venue for a great night of music.

Watch a video of The Modern Age below.