So, I've been working at The North Park Theatre for the past several months and every concert announcement that comes gets me a little tingly...we've had so many good shows come already, and when something falls right in my wheelhouse, I'm especially excited- like last week's show with The Head and The Heart. So earlier this week I told you we had big news. And then just before we announced the show, it was canceled. Just like that. A week of work and excitement, and after all that, no show. Fortunately, we have so many shows in our pockets, that we could swiftly replace one announcement with the other and so, today (actually yesterday if you were paying attention) we announced that we are bringing Cut Copy to the Theatre. After seeing them at Outside Lands, this is going to be an epic way to spend Halloween. So tickets go on sale for the show on Friday, but we have a presale now through Thursday at midnight. Password is halloween. We also added the Check Yo Ponytail Anniversary Show with The Presets. Tickets for that one also go on sale Friday, but we have a presale until midnight tomorrow with presale password ponytail. If the presales sell out, fret not, there are plenty of tickets and you can snag them on Friday. Anyway, the rest of our upcoming shows are listed below. Insider truth: if you want the cheapest tickets, buy your tickets with cash at the box office. The North Park Theatre box office is open Friday 3pm – 8pm and Saturday 12pm – 5pm. 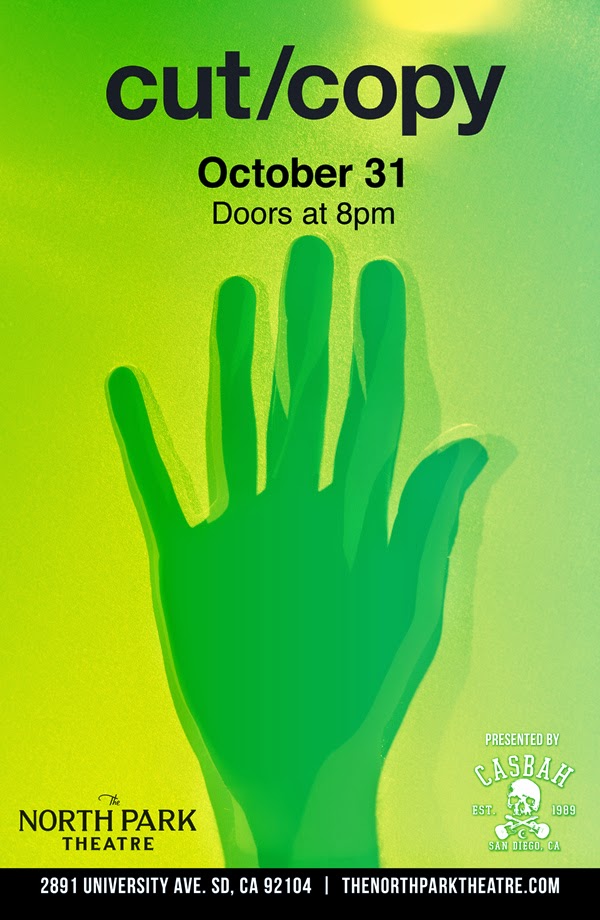 Email ThisBlogThis!Share to TwitterShare to FacebookShare to Pinterest
Labels: casbah presents, san diego music, the north park theatre, things to do, things to do in san diego