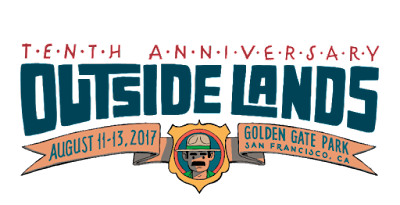 If you know me at all--live in person or through this site and social media--you know I'm not a festival person. I just don't have it in me to race from stage to stage, getting lost in a herd of thousands, when I'm used to the intimate experience offered at the Casbah, Soda Bar, or our midsize venues like Belly Up and Observatory. I've only been to Coachella twice and that's probably enough for me. However, a few years ago my friend/boss took me to Outside Lands and it was amazing. I mean, first of all, you have Bay Area weather which is way more my speed than the desert. But Outside Lands is just a special festival. Golden Gate Park is beautiful any time of year, but proves a great location for a festival. The way the schedule worked, we were able to see the City before and after festival hours, and it was more or less an overlap of Coachella bands minus the massive headliners (who I generally never care about anyway) and more of the up-and-coming indie bands.

All of this is to say that you can buy tickets--lineup yet to be announced--starting on Thursday at 10am PST. If you've thought about a festival weekend vacation, this one is totally worth it. You can read the press release spiel after the jump, or just be ready to BUY YOUR TICKETS HERE.

Another Planet Entertainment, Superfly, and Starr Hill are thrilled to announce that 3-day Eager Beaver tickets for the 10th anniversary of Outside Lands will go on sale on March 30th at 10am PT exclusively via www.sfoutsidelands.com. 3-day parking passes and 3-day shuttle passes will also go on sale at this time. The world’s original gourmet music festival takes place August 11th – 13th at San Francisco’s historic Golden Gate Park, bringing together the best music, food, wine, beer, art and comedy from across the region and the world.

Outside Lands is one of the few festivals in the world that sells out immediately upon announcement, boasting six consecutive sellouts. Due to overwhelming demand from past years, Outside Lands will be opening up all 3-day tickets for sale this Thursday, March 30th at 10am for the Eager Beaver On Sale. 3-Day GA and VIP tickets available exclusively at www.sfoutsidelands.com.

Since its inception, Outside Lands has evolved into a beloved San Francisco tradition and boon for the Bay Area, as thousands of fans from around the world flood the iconic city for an incomparable weekend in one of the world’s greatest green spaces. As part of the festival’s ongoing commitment to the local community, Outside Lands has contributed nearly $17 million to the San Francisco Recreation & Park Department. Additionally, the festival generates over $70 million annually for San Francisco’s economy and employs over 4,850 people each year. As one of the world’s most sustainable large scale events, Outside Lands diverts more waste than any other festival of its size. In 2016, an astonishing 91% of the festival’s waste was reused, recycled or composted.

Outside Lands highlights the city and its environs by putting special emphasis on the food, wine, art and culture that make the Bay Area so unique. For the 2017 festival, fans will have access to more than 80 Bay Area restaurants, 40+ Northern California wineries, close to 30 West coast breweries, and a collection of the region’s best cocktail bars. Both GastroMagic, a fan favorite stage devoted entirely to the synergy between culinary and performance art and The Barbary, a variety tent named for San Francisco’s notorious Barbary Coast featuring top names in comedy, podcasts, music, improv and general weirdness will also return to the festival.

Outside Lands is simultaneously a true destination festival and a celebration of the region’s best. You won’t want to miss it.
Posted by Rosemary Bystrak at Thursday, March 30, 2017