Okay, I'm not coming out with any breaking news, but the fast few weeks have had some big announcements and I've been kinda slacking. So today you're going to get an abundance of posts from me, one an hour, until I get all of this stuff posted. This is the first of many.

One of my favorite events of the year happens annually on Mothers' Day weekend. We've been taking my mom (and smuggling in our own snacks & drinks) for several years. It feels like over the years there are fewer cajun and zydeco bands and more swing, honky tonk, and jazz, but the diversity is great, the people watching is awesome, the dancing is fun, and a day in the San Diego sun with mom is priceless. For full info, check their website here. 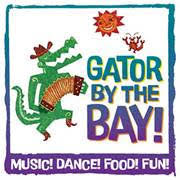 San Diego’s annual Gator By The Bay is the largest, most-authentic Louisiana-themed music and food festival this side of the bayou. Taking place May 11-14, 2017, it features more than 100 musical acts and special performances on seven stages, southern cuisine including 10,000 pounds of crawfish trucked from Louisiana, non-stop live music, dancing and family fun on the beautiful San Diego Bay.

Gator By The Bay brings Louisiana’s rich and diverse culture right to San Diego by showcasing Louisiana’s eclectic melting pot of history, food, music, dance and more. Since its inception in 2001, the festival has grown to showcase an array of music choices from blues, salsa, zydeco, Cajun and a taste of country, including Grammy winning artists directly from Louisiana.

TICKETS and INFO:
Thursday night concert tickets range in price from $25 to $95. Daily festival tickets range from $30 to $40. 3-day and 4-day passes are available for the deepest discounts. Children 17 and under are admitted free with a paid adult. Patron passes include access to the Patron Reception Area including a complimentary meal, personal meet and greet with festival headliners, complimentary craft beer, select wines, soft drinks and water, private shaded seating and upgraded restrooms and additional reserved shaded seating near both main stages. This is available for $120 per day (Saturday or Sunday) or $200 for both days. Find all festival, ticket, lodging, parking and free shuttle info at www.gatorbythebay.com.

Full press release and blah blah info is after the jump.


San Diego’s Gator By The Bay Music & Food Festival
-Louisiana-themed Zydeco, Blues and Crawfish festival to be held May 11 through May 14, 2017-

SAN DIEGO (November 15, 2016) – San Diego’s annual Gator By The Bay, the largest, most-authentic Louisiana-themed music and food festival this side of the bayou will be held May 11- 14, 2017. Presented by San Diego’s Bon Temps Social Club, it features four days of live music with over 100 musical acts and special performances on seven stages, southern cuisine including 10,000 pounds of crawfish trucked from Louisiana, non-stop live music, dancing and family fun at Spanish Landing Park on beautiful San Diego Bay across from the airport. For a glimpse of what to expect at Gator By The Bay, watch this video.

“Gator By The Bay is an all-in-one event that brings Louisiana’s rich and diverse culture right to San Diego Bay by showcasing Louisiana’s eclectic melting pot of history, food, music, dance and more,” said Peter Oliver, a Gator By The Bay Producer. “We truly pride ourselves in offering San Diegans and visitors alike the chance to experience authentic Louisiana culture. I can guarantee you will discover something new and leave wanting more.”

Since its inception in 2001, the festival has grown to showcase an array of music choices from blues, salsa, zydeco, Cajun and a taste of country, including Grammy winning artists directly from Louisiana, legendary Chicago and California blues artists, rockabilly and roots performers and award-winning salsa and Latin bands. The festival has become an annual must-do for enthusiasts of all ages who have travelled from throughout California and 39 other U.S. states, Canada, Mexico, Europe, Asia, New Zealand and Australia.

“Dancers, twirling to Cajun waltzes, two-stepping to a lively Creole zydeco beat, swinging and jitterbugging to blues and boogie-woogie, or moving to spicy Latin sounds will fill the dance floors all weekend,” said Oliver. “At Gator By The Bay, we start movin’ and groovin’ the second the music starts and guarantee you will too. You’ll feel like you’re at a Mardi Gras party in May.”

The festival will kick-off with a concert headlined by Grammy nominated blues singer and pianist, Marcia Ball, on Thursday, May 11 from 6 – 10:30 p.m. The Texas-born, Louisiana-raised musical storyteller has earned worldwide fame for her ability to ignite a full-scale roadhouse rhythm and blues party every time she strolls onto the stage. In 2010, she was inducted into the Gulf Coast Music Hall Of Fame and in 2012 into the Louisiana Music Hall of Fame. She's received a total of six Living Blues Awards, nine Blues Music Awards and five Grammy nominations.

Some of the other musical headliners this year include:
·        Grammy-award winning Steve Riley and the Mamou Playboys from Mamou, Louisiana playing Cajun accordion, soulful fiddling and a blend of electric and acoustic guitar sounds for a new twist of traditional Louisiana folk music.
·        Blues, soul, funk & rock and roll group Igor Prado Band from Sao Paulo Brazil, with local guest Whitney Shay on vocals. Igor’s music style mixes the blues with elements of swing and famous jazz dance hall sounds  of the forties.
·        Chubby Carrier and the Bayou Swamp Band, a Grammy-award winning band straight from Lafayette, Louisiana, playing a mix of traditional Zydeco with accordion and washboard with dashes of ‘70s funk and classic R&B to carry out the true bayou sounds of ”funky swamp” Zydeco music.
·        Dennis Jones Band, a three-member rock and blues band with sizzling hot guitar solos, smooth and soulful vocals and high-energy performance.
·        Grammy nominated Zydeco band Geno Delafose & French Rockin’ Boogie from Eunice, Louisiana. Delafose, a Zydeco accordionist and singer, is the innovator of the sound known as the nouveau Zydeco. His sound is deeply rooted in traditional Creole music with strong influences from Cajun music and also country and western.
·        And many, many more to be announced soon.

DANCE
The festival boasts five wooden dance floors, including two 3,000 square foot shaded dance floors at each of the two main stages. For those who want to shake shimmy or stomp your feet in other than free style there will be free lessons by some of the finest dance instructors in the country.

FOOD
The French Quarter Food Court features the authentic tastes of Louisiana, with many vendors making the cross-country trip just for the festival. Revelers will fill up on fresh Louisiana-raised crawfish, boudin sausage, catfish, alligator, barbecue and oysters. A mouth-watering selection of Louisiana favorites will be available, including gumbo, jambalaya, po’ boys and etouffée. For dessert there will be a Southern selection of beignets, sweet potato pie, homemade ice cream, pralines and bread pudding.

FUN ACTIVITIES FOR KIDS
All areas of the festival are open to children to enjoy the music, color, spirit and activities of the event.  Special activities include the costumed Mardi Gras parades and making outrageous hats with the Rad Hatter.

LOUISIANA AND AMERICANA MUSIC CULTURE
On the intimate Bayou Grove Stage, visiting musicians tell the stories behind the heritage of their crafts.

TASTE OF LOUISIANA
In the Taste of Louisiana Food Pavilion, Louisiana and local chefs host cooking demos and tastings.

Financial support for Gator By The Bay is provided in part by the City of San Diego Commission for Arts and Culture and the County of San Diego Community Enhancement program. Additional support is provided by the Port of San Diego, Anheuser-Busch – Kona Brewery and the Louisiana Seafood Promotion and Marketing Board. The festival is supported in part by the State of Louisiana Office of Tourism, Lafayette Convention & Visitors Bureau and other regional tourism bureaus.

###
About Gator By The Bay:
On May 11-14, 2017, Gator By The Bay will host its 16th annual festival at Spanish Landing Park across from the San Diego airport, featuring four days of live music with over 100 musical acts and performances on seven stages. The festival also features a wide array of Southern culinary delights including gumbo, jambalaya, beignets and 10,000 pounds of crawfish brought directly from Louisiana. Since its inception in 2001 the festival has grown to showcase not only Grammy winning Cajun and zydeco artists from Louisiana, but also legendary Chicago and California blues artists, rockabilly and roots performers and award-winning salsa and Latin bands. For more information, visit: www.gatorbythebay.com.
Posted by Rosemary Bystrak at Wednesday, March 29, 2017

Email ThisBlogThis!Share to TwitterShare to FacebookShare to Pinterest
Labels: gator by the bay