4th of July Fireworks and Events

I'm sure I'm not the only one feeling a little less than celebratory this Independence Day. Nova's out of town so there's not that sense of urgency to do anything, really. But I know there's lots of fun to be had and Darren will be out working all day, so I'm gonna make the best of it. If you haven't made plans, last year we just had a little BBQ at home and made a last minute decision to catch the SDMTS Rapid to Waterfront Park. NBC has a list of fireworks and I'm sure every other news outlet does, too, I just wasn't up for compiling my own list this year. I will note, however, that the Cabrillo Monument is sold out, so don't head there. If you want to take public transit, fares are BOGO today! Which really does me no good since I'll be adventuring solo, but in case you wanna make your own beer crawl or fireworks adventure, that is a good option. And let's all pour one out for the infamous 2012 Big Bay Bust. Ah, good times. 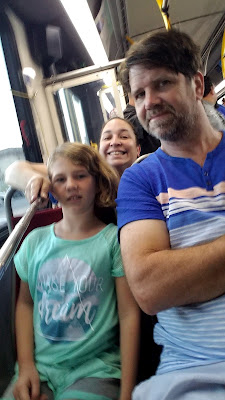 San Diego Bay
San Diego's biggest 4th of July Fireworks show takes over the San Diego Bay with four barges at different points. There are great viewing areas all along the bay for this annual event! Parking is free and plentiful at SDCCU Stadium as well as at other park-and-ride lots throughout the system.

Due to the Holiday, MTS will be operating a Sunday schedule. However, to accommodate the many thousands of people heading to the Big Bay Boom fireworks, the Trolley will be adding significant service on all three lines!

Remember, it's a major holiday so the FRIENDS RIDE FREE promotion is in effect. A friend may ride free with a fare-paying customer on all MTS routes on July 4, 2019.

Prime viewing locations are near the following stations: