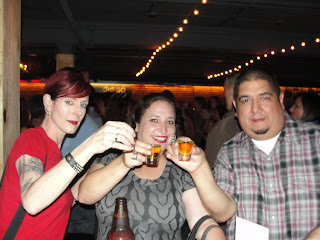 Living life out loud...that is to say, keeping this site up to date with all of the things to do and happenings around town while sharing my personal ups and downs and trials and tribulations...can be very strange sometimes. I try not to think too much about just how much total strangers know about me because the reality check is a little too heavy. Still, most of the time it doesn't really have much effect on what I say or do or what I post. If I feel it, it is going to be blasted out one way or another. The positive to all of that is months, or weeks, or days like today are so overwhelming when I look at my phone and there are texts and Facebook wall posts and tweets from family, friends, acquaintances, and even people I've never had the pleasure of meeting in real life, wishing me a happy birthday. So I thought I'd write a little post because this week has truly been incredible and we're only just now getting into the weekend. Lengthy text-heavy post, after the jump.

So I left off on Wednesday morning and suffice it to say that though it was only 2 days ago, it feels like my days and nights have been really packed to the brim with one good thing after another. Usually on Wednesdays we have a Casbah meeting, but Pyles couldn't make it so we skipped this week which meant I was totally free as was Darren, so on Tuesday night I thought of all kinds of cool things to do in the daytime when you have an entire day to do anything you please. Fortunately I have a somewhat flexible schedule anyway, so I plan on hitting many of the activities I brainstormed, but it turned out to be a cool little Staycation. So I suppose this post is for me for posterity, but you might also discover something about San Diego that you didn't know before.

We started at Cafe Moto (2619 National Avenue) which had some of the best coffee I've had in a long time. They serve primarily as coffee roasters, but have a small cafe up front, and one of the coolest coffee stills I've ever seen. The decor is really cool and the service was great, too. From there, we decided to check out the new San Diego Public Market (1735 National Avenue). I think I posted their kickstarter campaign about a month ago and though the facility is not officially opening until spring, they currently host a farmers market on Sundays and Wednesdays from 9am-2pm. We sampled some great bites, picked up some fresh produce, and got some goat cheese cheesecake for later. While we were there, I received a confirmation from the Hard Rock Hotel that my reservation was extended to two days and we could check in whenever we were ready. Though really excited to get there, we needed an actual meal, so we went to Las Cuatro Milpas (1875 Logan) since Darren had never been and we're currently in a taco war to see who has more knowledge about the best tacos in San Diego. It was amazing as it always is (and has been for decades). 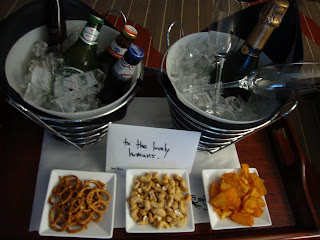 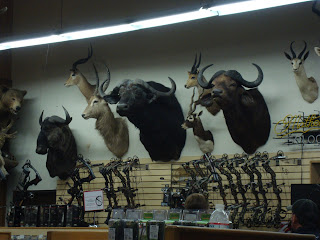 From there, we went to the Hard Rock Hotel to check in and they really do make you feel like "Rock Royalty". With my complimentary beer in hand from the VIP check-in, we checked out the room for a little while, and received a delivery of a tray that had a bucket of beer, some small snacks, and a bottle of champagne with a birthday card. There are no words for how special Matt and Robby and everyone else at the hotel can make a girl feel. With a few hours still before I had to work, we decided to stop at my house so I could pack a bag (since I was originally going to check in on Thursday).

Darren has been doing archery for a long time now, and I had always wanted to, so we've taken a couple recent trips to Morley Field's Archery Range, but after getting my things together, we went up to Miramar Road to check out Performance Archery. They were just about to start a class, so Darren signed me up and it was so.much.fun. I was actually impressed with my shooting, hitting my target all but once. The instructor, Gayla Robinson, gives simple instructions for the $20 class, and I chatted with her a little to find out she's been teaching for 36 years (!) and has instructed over 50,000 people (!!), for which she was just inducted into the Archery Hall of Fame. Their website says classes are Wednesday from 7-8pm, but we were there early and got in on an earlier class, so call in advance to get actual times. The sport isn't cheap, however, so I think I'll scour Craigslist or eBay to find gear that isn't going to set me back $200-$600. Animal rights activists probably want to steer clear. 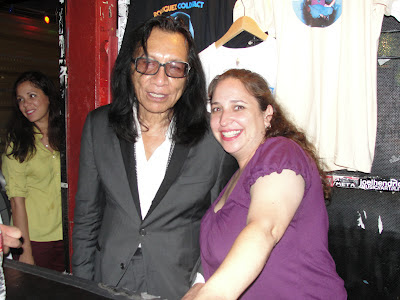 After shooting some arrows, it was time for work, so I went to the Casbah to set up for the night of doing merch for Rodriguez. The show had been sold out for some time with new interest because of the documentary, Searching for Sugar Man, which I saw last week and is truly an incredible story. He soundchecked as I set up and from the time the doors finally opened until 1am, I was busy non-stop. With 5 t-shirt styles and three CDs, I hope Rodriguez is finally getting his due. The venue was overflowing with people and because he plays so quiet, all of the indoor fans were off, which made for a steamy room, but when his set finished around 11:15, he stayed at the merch table until 1am shaking hands, signing everything, and taking photos with fans. It was truly an honor to work for him. 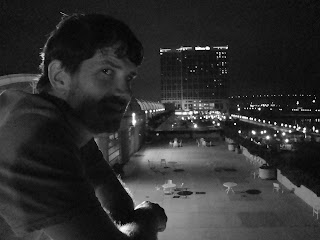 Darren and I caught a cab back to the hotel to drop off my things and decided to have some drinks at the Chee-Chee Club until closing, and then wandered downtown for awhile. I had no idea that the clear glass elevator at the Convention Center is always open, and it was pretty amazing being on the rooftop with not a soul around as we looked out onto the bay before finally calling it a night back at the hotel.

On Thursday morning, it was delightful to just hang around the room with some breakfast fruit and coffee then a short walk around the East Village before Darren had to leave. He dropped me off at C Street where I went on a total shopping rampage for 2 hours. I don't shop often and 95% of my wardrobe consists of band shirts and hoodies, so it was nice to buy some shirts and dresses for my upcoming trip to Puerto Vallarta. 7 shirts, 3 dresses, 1 pair of Levi's, 2 pairs of shoes, 3 handbags, 4 sets of earrings, two rings, and a set of new ear buds later, and I returned to the hotel to get some work done and chill out for awhile before starting my night.

I treated myself to Cafe Sevilla for dinner. Their happy hour has always been one of my favorites, and in the new location they've expanded their offerings so I got some of my favorites (pan con alioli, tortilla espanola, albondigas al jerez) and the new Carcuterie, which for only $4 is a steal. From there it was time for SoundDiego Live at the Propagandist, but not before stopping in at Vin De Syrah with Pyles to see A-Fresh and have a couple cocktails. SoundDiego Live was a great time, as evidenced by the photos. When it was over, Darren and I went to Syrah for one more drink, got some food at Sultan Shwarma, and retired to the hotel to enjoy the champagne that was gifted upon our check-in.

Now it is Friday, my actual birthday. After a late hotel check-out, we had lunch at Lucky's Lunch Counter before I had to get home to Pascha and Kiwi, to unpack my bags, and to let the week of fun soak in while I ready myself for a big night and weekend ahead. Thanks to everyone who has made this such an incredible week and it's only just beginning. See you at Menomena, Adams Avenue Street Fair, Devotchka, and more. Hopefully I can make it down for some San Diego Film Fest action, too.

To all of you, from the bottom of my warmed and brimming-with-love heart, thank you.
Posted by Rosemary Bystrak at Friday, September 28, 2012

you know what, 95% of my wardrobe consists of gildan stuff , unlike you:)
GOD Bless you!
Have a nice weekend,