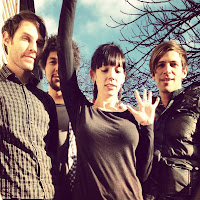 The upcoming weekend is nearly here, full of great live music events in San Diego. While this Sunday is Oscar night, what better way to finish the evening than with a show in cozy Kensington. Portland indie rockers Ramona Falls are headlining a terrific bill at the Ken Club, presented by the nice folks at Soda Bar. The creative genius behind this band is none other than former Menomena band member Brent Knopf. Most of the songs from the band's first release, Intuit, were "test driven" while Brent was still in his previous group. Good reviews and a desire to be in complete control led to the formation of Ramona Falls on a full time basis. In addition, band member Matt Sheehy (guitar) is also in the group Lost Lander, whose initial album was produced by Brent. Such is the nature of the music community to the north (Portland) and everyone else gets to benefit from the music. Ramona Falls recently released their sophomore album Prophet. The sound is very complex at times, but that is part of Mr. Knopf's creative marrow. The result is a pleasant listen which shows the band growing their sound. Brent's vocals  lead the way, but do not overpower the music.

After the winners are announced during Hollywood's big night, head over to Adams Avenue for what is sure to be a memorable night of music. Be sure to catch opener Social Studies, an up and coming band from San Francisco.

Watch a video of Fingerhold below.