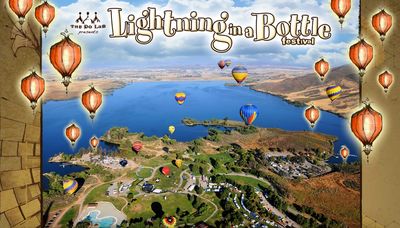 There was concern that Lighting in a Bottle, was not going to return this year and if you wanted a Do Lab festival experience then Coachella was the only option.  Do not worry as Lightning in a Bottle, the Southern California music and yoga festival is happening this year and the location is closer to San Diego, Lake Skinner in Temecula.  Lightning in a Bottle has brought in acts like Pretty Lights and Bassnectar, music acts and speakers have not been announced yet but judging from previous years the festival will be well worth it.  Rush-N-Get-Em (get them here) tickets start at $195 presale tickets go on sale tomorrow 2/12/2013 and will be available for 48 hours or until they sell out.  General tickets go on sale March 18th starting at $240.  In addition, single day tickets will be available during the general ticket sale.
Posted by Chase Goodman Esq at Monday, February 11, 2013

Email ThisBlogThis!Share to TwitterShare to FacebookShare to Pinterest
Labels: lightning in a bottle, San Diego Concerts, Temecula Concerts, The Do Lab