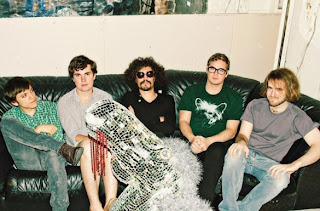 As the upcoming weekend is nearly upon us, cooler temperatures and great shows are headed to San Diego. Capping off the busy weekend will be none other than those young whipper snappers from Florida, Surfer Blood. I remember their first San Diego gig when van troubles almost kept them from making their set time. Alas, all was well and their career has taken some interesting twists and turns since that autumn evening. The band signed with industry heavy Warner Bros. Records, and their sophomore release, Pythons, is due out on June 11. Meanwhile, the lads are completing a seven date run through the Golden State, while an upcoming tour with Foals is right around the corner. Getting a chance to hear some new songs as well as the 'older' songs is all I need to head down to the iconic Middletown venue. After all, that is where it started here for this band. The songs are catchy, lead singer JT has a carefree (yet charming) attitude and the band certainly brings a frenetic performance to each live show. I have only listened to Weird Shapes, the single off the upcoming album, and if it is any indication, then Pythons should be a welcome addition to Surfer Blood's discography.

Watch a video of Floating Vibes below.