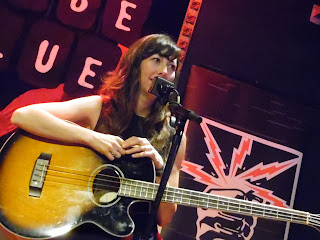 A few weeks ago, we had the pleasure of attending one of FM 94/9's "Loud @" private sessions at the House of Blues Voodoo Room. What was fitting was that though I have seen Silversun Pickups probably a dozen or more times, my first time ever seeing them was in the same room (though Brian told me their first SD show was actually at the Casbah opening for Brendan Bensen). I have to say we were pretty spoiled because while the rest of the crowd assembled in the bar, we were allowed to be in the room while Nikki and Brian soundchecked. In fact, I was helping Nova with her homework as Darren parked the car and then joined us inside, which is always fun being privy to their banter, and just hearing the songs so pure without anyone standing in front of you or talking over the music. We got to chit chat a little before they opened the doors and let everyone in, and I have to say it was pretty great hearing their songs so intimately again. It was also pretty rad getting to share the moment with Nova, who came up while I was recording and started taking photos with my phone. After the set, she asked me if we would be able to see Silversun Pickups again. In fact, we'll be seeing them this Saturday at the Oceanside Pier for FM 94/9 Independence Jam. (Along with Metric, who I interviewed on NBC SoundDiego here.) I'm a little surprised there are still tickets available, to be honest, but there are and you can get them here. 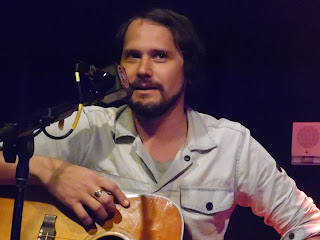 Anyway, I was really lagging on posting these videos but the day this was filmed, I also worked for The Drums at the Irenic and then went to the Casbah for Rocky Votolato, Dave Hause, and Chris Farren, and have pretty much been swamped between then and now. In fact, I'm posting this as I'm slinging merch for The Church and Psychedelic Furs at The Observatory, and even so only because I'm procrastinating doing my actual work. So finally, my four videos from their set are below in the playlist. They played "Lazy Eye", "The Pit", "The Royal We", and their new single "Nightlight". I have a full concert of theirs from 2012 at The Observatory Santa Ana and another from 2012 at The Belly Up if you're really feeling their vibe.