I don't really like just posting press releases verbatim, however I'm running out of time before I head out to DCFC and with my birthday on Monday, I just don't want to spend anymore time online today than I have to. So that being said, I love Tour de Fat and not donating my Mazda back when I had the chance is probably my biggest regret of the last few years. Between this and Adams Avenue Street Fair, San Diego Blues Festival, and Oktoberfest Celebrations kicking off, you should have no shortage of fun stuff to do this weekend. 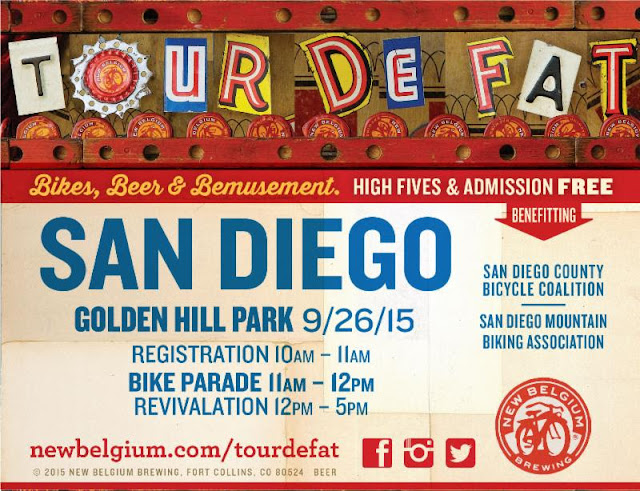 New Belgium Brewing’s traveling carnival, Tour de Fat, returns to San Diego this Saturday, September 26. The festivities kick off in Golden Hill Park and New Belgium is looking for a car-for-bike swapper – someone willing to swap his or her car keys for a $2,250 stipend to buy a dream bike and live car-free for a year.

Swappers are chosen after submitting an application describing why they are ready to give up their vehicle for the gift of two wheels. Submit your video at: NewBelgium.com/Events/Tour-de-Fat/CarTrader.

The San Diego stop is the ninth of the 2015 Tour de Fat season and will feature eclectic entertainment, yo-yo performances and even vaudeville acts. Everyone 21 and older is invited to sample new and classic favorites from New Belgium including the brewery’s flagship brew, Fat Tire, New Belgium’s latest year-round offering, Slow Ride Session IPA, and selections from the acclaimed Lips of Faith series.

Tour de Fat is free to participants, but beer and merchandise proceeds from the San Diego stop will go to: