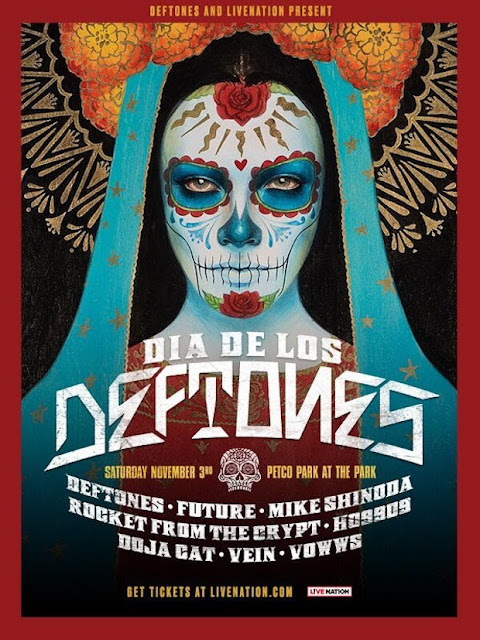 Yesterday Livenation announced Dia De Los Deftones, taking place at Petco Park on November 3rd, 2018. The event features performances by Deftones, Future, Mike Shinoda, Rocket From The Crypt, Ho99o9, Doja Cat, Vein and Vowws. Tickets are $75 plus fees or $195 and up for VIP Packages. Tickets go on sale Friday at 10am via Ticketmaster, but you might find yourself to be a particularly  strong interwebs investigator and find a presale code which started early Tuesday. Get tickets here.

The November 3rd date in San Diego, CA will be one of two exclusive Deftones’ appearances in California this year. Deftones have released eight studio albums to date and have sold over ten million albums worldwide.  The band is vocalist/guitarist Chino Moreno, guitarist Stephen Carpenter, keyboardist / samplist Frank Delgado, drummer Abe Cunningham, and bassist Sergio Vega.  Speaking about the upcoming festival, Chino says, “For years, we’ve played on festivals with such amazing and diverse line-ups and that is what we have achieved with our first line-up for Dia de Los Deftones. We want this event to be a celebration; with the incredible artists we’ve assembled, and the experiences we’re curating for the festival site, it’s going to be a wonderful day and night for all who join us.” Abe adds, “We are absolutely thrilled to have such fantastic and credible artists joining us on this maiden voyage, and we look forward to bringing it to you.”

On other artists performing:

Future is a rapper, actor and composer nominated for three Billboard Music Awards in 2017 for Top Male Artist, Top Rap Tour and Top Rap Artist. Also known as Future Hendrix, Future was also nominated for Best Male Hip Hop Artist in 2014 at the BET AWARDs.  Future is set to co-headline on the NickiHndrxx Tour with Nicki Minaj this fall, which will visit 28 markets starting in September and ending in Las Vegas in November.  Future recently produced and performed on the soundtrack for the motion picture Superfly, released in 2018.

After a summer European tour, the punk hip-hop duo Ho99o9 (pronounced ‘Horror’) will bring their sociopolitical themed songs from their debut album “United States of Horror” to San Diego.

Doja Cat’s debut album Amala was released in March of this year and features her singles “Candy”, “Roll With Us” and “Go To Town.”  After touring with Lizzo in 2017, Doja Cat is playing select shows throughout 2018, including Dia De Los Deftones in San Diego.

Vowws is an Australian death-pop duo based out of Los Angeles who released their second album Under the World in March of 2018.

Vein is a rising death metal band based out of Rome and founded in 2014.  Their debut album Innocence was released in May of 2017.
Posted by Rosemary Bystrak at Tuesday, July 17, 2018