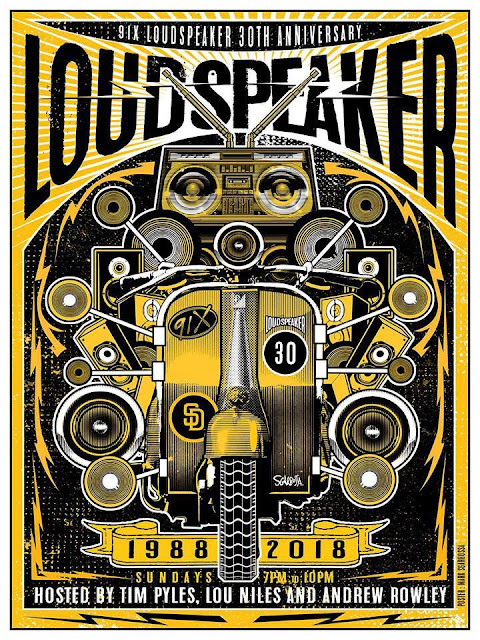 91X's Loudspeaker is celebrating 30 years on the radio. It all started back in 1988 with Marco Collins and has had several hosts over the years, but on Tuesday, the City of San Diego is proclaiming 91X Loudspeaker Day at Council Chambers, and when night falls, there's going to be a full celebration at the Casbah, with music by Low Volts, N-E-1, Rob Crow, Pall Jenkins, Chris Coté, Pony Death Ride, and local karoke hosted by Scotty Pants Karaoke.

I can't say I've been listening from the beginning (I just wasn't that cool as a tween), but I definitely started listening in the Lou Niles era and through high school I'd record the show on cassette and started to get my intro to music that I couldn't see in bars. All the hosts through the years have been amazing and I am so proud of Pyles to continue carrying the torch not just on-air but all over San Diego in celebrating local music. I've heard Marco Collins is making it down for this one, so it is going to be a super special night. I hope to see everyone there.

Scotty Pants All Local Karaoke in the Razzmatazz Lounge

The full press release is after the jump.


91X Loudspeaker Day in the City of San Diego

San Diego’s longest running local music specialty show is celebrating 30 years on 91X.  91X began in 1983 and by 1988 had a show dedicated to local music, called Loudspeaker.  The show was created by Marco Collins and has had numerous Hosts over the years, notably the current Hosts who returned to the show in 2014, Lou Niles (1990 - 1996), Tim Pyles (1998 - 2004) and Andrew Rowley (2007 - 2011).  Currently Loudspeaker is a three hour show on Sunday (7pm to 10pm) night dedicated to music and musicians from San Diego, but with our transmitter located in Tijuana, Mexico we feel an obligation to support our brothers South of the Border, down Mexico way..

We have been celebrating all year long with some Loudspeaker 30 Presents shows already, that have included Pinback, Hot Snakes and Unwritten Law.  Coming up on July 28th at the Casbah we have an Alphabet Records celebration featuring some seminal SD bands from the late 90’s, early 2000’s reuniting for One Night Only to include Swindle, Agent 51 and The Classified at the Casbah.  This show is sold-out!

The big day is Tuesday, July 31st when Councilman David Alvarez will present Loudspeaker with a proclamation declaring 91X Loudspeaker Day in the City of San Diego!  Special thanks to Mayor Faulconer’s team in assisting in the proclamation.  The proclamation will take place in the city council chambers at 10am and all are invited!  Let’s make it a celebration of local music!

That night at the Casbah we are putting together a party to celebrate with Low Volts, N-E-1 (the first local band to get regular spins on 91X), Rob Crow (Pinback), Pall Jenkins (Three Mile Pilot, The Black Heart Procession), Chris Cote (Kut U Up), Pony Death Ride and Scotty Pants all local karaoke in the Razzmatazz Lounge (named after former Casbah owner Bob Bennett who also once had a store by that name).

Lou Niles - "For me its always been about turning people on to great music and doing what we can do to help break bands. From my early days learning from Marco,  the amazing scene in the early mid 90's and the incredible music today, I just love the music and the people. That's Loudspeaker to me."

Tim Pyles - “I feel extremely lucky to support our music scene, the musicians and playing a role in exposing these artists to the masses, that’s the goal anyway. For twenty years I have had the privilege of playing a direct role in helping musicians realize their dreams, that is a good feeling.”

Andrew Rowley - “I have been producing a mini documentary series throughout the celebration this year talking with people that have grown up in the scene over the years, called Stories From The Scene. So far the series has included audio engineer Ben Moore, Brian Karscig of Louis XIV, Vic Fuentes of Pierce The Veil, and a handful of 91X jocks. Produced by Rowlbertos Media and hosted by 91X. It's a great series that captures many different perspectives from every corner of our beloved music community."

Celebrate local music with Loudspeaker every Sunday at 7pm on 91X
Posted by Rosemary Bystrak at Monday, July 30, 2018