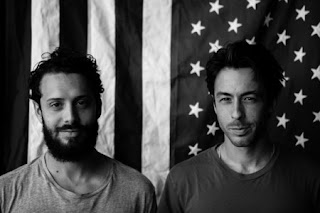 Darren Weiss and Daniel Presant are the dynamic duo behind emerging LA band PAPA. Touring as a four piece, with only an EP to their credit, (their full length will be released sometime later this summer), the songs are full of energy and mark a band that are headed for bigger things. Weiss was formerly the drummer for the now defunct band Girls, but now he is front and center as the imposing lead in PAPA. Presant complements him well and is a very talented bass player. While playing to sold out crowds in their hometown, San Diegans await their arrival next Monday at the Casbah. I realize many folks will be hitting the snooze button after the Comic-Con weekend, but those willing to see a high energy show will be greatly rewarded. For those unfamiliar with PAPA's music, listen to a few standout tracks (courtesy of SoundCloud) below.

Tickets for the show can be purchased here.