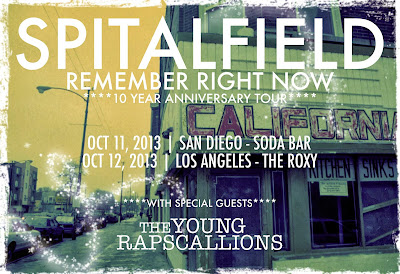 Spitalfield is asking San Diego fans to "Remember Right Now" and join them for their 10 year celebration of their break out album at the Soda Bar tonight.

Amidst all of the 90s nostalgia brought on by the endless Buzzfeed lists, it is always refreshing and gut-wrenching to a 25-year-old like myself to see decade celebrations of albums and art from my teenaged years.  Spitalfield's "Remember Right Now" was a stand-out emo album in the early 2000s, back when bands wrestled hard with such a label.  But to 15-year-old me, their delightful harmonies and irresistible hooks meant more than the any genre label.  After disbanding in 2007, the band has played a few select shows together but in April of this year they reunited the original line-up to commemorate the album that put them on the map.  Touring in support of them are The Young Rapscallions, with Christopher Mintz-Plasse (of Super Bad and Kick-Ass fame) on drums,  and Buddy Banter.  Tickets are $12 and doors are at 8pm.  Be sure to watch a video of them performing "I Loved the Way She Said LA" live from a concert earlier this year below.