I'm gonna start this post with the most important thing that everybody should read: Embryos Don't Have Hearts. More reading and watching after the jump.


I haven't done a catch up in a while and I started this one before I got sick and it was even painful to be online, so I've got a ton I've been watching and reading over the past month or so and I'll start a new one. I recently read When Breath Becomes Air by Paul Kalanithi, The Last Black Unicorn by Tiffany Haddish and Life Will Be the Death of Me: . . . and You Too! by Chelsea Handler. They're all available from the San Diego library system.

I zipped through When Breath and cried my eyes out. The autobiography is the true life account of a doctor diagnosed with terminal cancer in his mid-thirties. I was a little worried it was gonna be religious, but though he does have a "God is Real" moment, it doesn't really focus there. Instead, he chronicles the real-life challenges and pain and unknowing and sadness over lost potential that his diagnosis created, while also making the decision with his wife to have a baby who brought hope and love and joy to his final months. I actually got the book recommendation from someone on Southern Charmed, so lest you think I'm some sort of intellectual, clearly I'm not.

I also zipped through Tiffany Haddish's book, but because it's kinda terrible. The first half was funny to a point, but that I was drinking wine that night probably helped, because when I finished it, I didn't have a very high opinion of her, which is sad because I generally like her comedy and movies. It really bothered me the way she talks about a sexual experience with a co-worker with cerebral palsy and the last part of it feels like four chapters of a humble brag, name dropping friends and brands and stories about the Smiths (Will and Jada et al) that I just find kinda gross. I wouldn't recommend this one.

I've attempted to read Chelsea Handler's books in the past, but they always felt forced and like she was trying too hard, but Life... is overall really good as she delves deep into therapy to find why she is the way she is and to try to be a better person. I wasn't super interested in her drug trips, but overall it's a quick and easy read for anyone who has enjoyed her comedy and shows over the years. 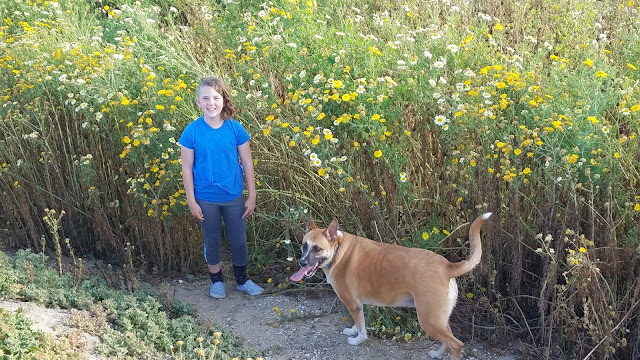 I find the more books I read, the less infuriating news I read, but something good happened at City Council: San Diego City Council Committee OK’s Proposal For Off-Leash Dog Park On Fiesta Island. I only started going to Fiesta Island Dog Park this year, but it was amazing during the superbloom and it became easy to take Ficus while Nova's at soccer, at least until Fi hurt her leg, leaving her hobbling for a few weeks. I signed up for FIDO when I saw them at Earth Day and they would like you to know that "the item would be heard before the full City Council on Monday, June 17th. The hearing will begin at 2pm." Sign up for their newsletter here.


As for TV watching, I binged through Ramy on Hulu, Dead To Me on Netflix, the latest season of Kim's Convenience, also on Netflix, and I'm enjoying the return  of The Bold Type on Freeform/Hulu episode by episode. I'll catch up with new reads and watches in a separate post because I've just gone too long with my posts sitting in drafts.
Posted by Rosemary Bystrak at Tuesday, June 04, 2019

Email ThisBlogThis!Share to TwitterShare to FacebookShare to Pinterest
Labels: what I'm reading, what i'm watching