Contest: Tickets To See Chairlift At The Loft At UCSD 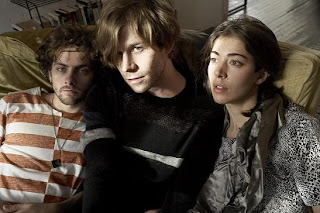 Brooklyn synth-pop trio Chairlift will be performing at The Loft (USCD) on Tuesday, Sept. 15th. Animal Collective collaborator/composer John Maus will be joining the band as a fourth guest member on their fall headlining US and European tour with Phoenix and The Killers!

Dubbed one of Vanity Fair's "3 Bands to Watch" this year, Chairlift has been touring for the greater half of '09 with YACHT, Sebastian Tellier, and Peter, Bjorn & John among others, in support of their celebrated Columbia Records debut, Does You Inspire You (feat. the production work of Chris Taylor of Grizzly Bear). Chairlift's single "Bruises" was also featured in the iPod Nano Commercial late last year.

The band made their late night television debut on Craig Ferguson last month, and recently did an exclusive collaboration with Marc Jacobs and Saks Fifth Avenue for their fall MARC BY MARC JACOBS Ready-To-Wear and Accessories Collections for Fashion Week. Their video "Evident Utensil" was also nominated for "Breakthrough Video" at the 2009 MTV Video Music Awards.

If you would like a pair of tickets, e-mail sddialedin AT gmail dot com with subject "Chairlift". Include your full name and phone number. The show is all ages. Winner will be notified Monday.
Posted by Rosemary Bystrak at Saturday, September 12, 2009

Email ThisBlogThis!Share to TwitterShare to FacebookShare to Pinterest
Labels: chairlift, the loft, ucsd