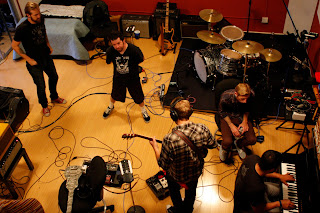 Hi everyone, Brian from Blackout Party here. I'm excited Rosey invited me to share some about the last week we spent in the studio. Thanks to her, and to all the loyal SDdialedin readers, enjoy...

On Wednesday, April 20th we set up shop at Lost Ark studios to make a record with Mike Butler producing. The whole idea was to cut as much of it live as possible, meaning we were all standing in a circle playing music together, as opposed to slowly layering every sound over the drums. We had made our first record the other way, and figured doing it live would capture the raw energy we wanted, plus be way faster.


The first night we spent about 5 hours getting everything set up. Guitar amps had to be mic'd up and baffled, meaning we built little boxes around them so they wouldn't get picked up by any other microphones. Everyone would be playing together in the main room, except I was in the isolation booth behind glass sliding doors so I could cut the vocals live with the band. We tracked 1 song the 1st night, 2 songs each Thursday and Friday, and pulled a 14 hr. day Saturday. By Tuesday evening we finished the 15th song, all tracked live with minimal overdubs.

We have a few harmonies to finish, as well as some horn parts on a few tunes, then mixing, mastering, but we're really excited about how it's sounding even now before any EQ or mixing. Here's a clip of us listening back to a song Tim wrote and sang called "Casket Robbers". We had alot of fun making the beat with foot-stomps and a chain dropping on a piece of wood. Also if you listen closely at 1:20 you'll hear the sound of Hoth eating a tortilla chip to mimic the sound of a bone cracking. Pretty funny.

Posted by BlackoutPartyMusic at Friday, April 29, 2011