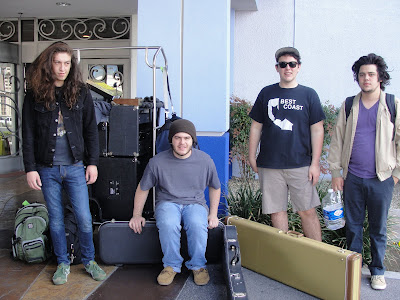 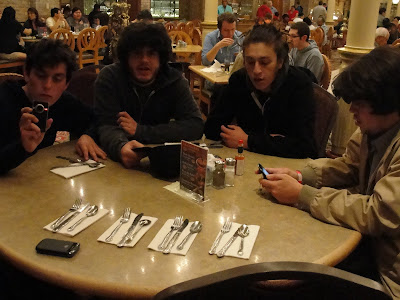 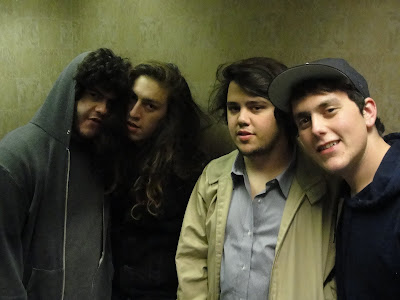 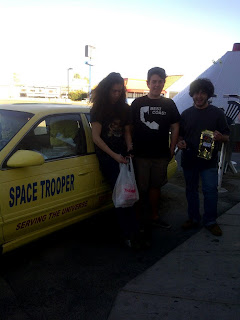 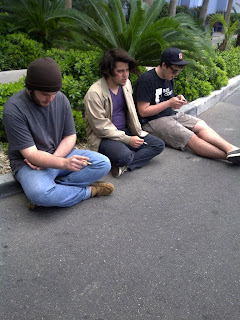 I realize I never posted about my last roadtrip to Vegas to see Transfer; somehow my post disappeared, but I'll recover it and post this week. In the meantime, I'm sitting in the car with D/Wolves and we have a couple hours to go and everyone is feverishly texting or facebooking, so I might as well join 'em.

As you know, sd:dialed in is one of The Rumble partners for the San Diego, which D/Wolves played on Saturday night along with Vanaprasta and New Mexico. That night was pretty awesome, especially after spending time at CityBeat's festival of beer, Revolver to catch Josh Damigo, and Analog to visit A-Fresh.

After D/Wolves finished and loaded their gear, we went to Brian & Patrick's for a few hours (we should've slept) and then hit the road to Vegas, where they were scheduled to play The Rumble again with Vanaprasta and a Vegas band called A Crowd of Small Adventures. The Vegas Rumble was at The Royal Resort for the first time and closer to the Strip than the previous location, near Wynn's Encore. The show was billed as a daytime pool party but there was a permit issue, so it was still a daytime show but moved inside into their cool living room- feeling lounge and bar, complete with a cool pool table and shuffleboard.

We arrived around 9 am Sunday morning and the hotel let us check in early where we tried to relax and nap (didn't really happen). When it was time for load-in, we were notified that Vanaprasta wasn't gonna make it, but the bands played on anyway with D/Wolves "headlining" to a small crowd of Small Adventures' fans, random hotel guests, and a few bloggers and Rumble supporters. 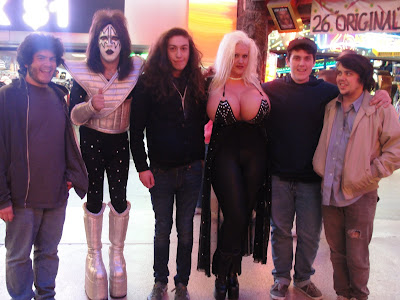 Though I'm not the band's manager, I've been helping them out with some things and after the show, when the boys clogged then subsequently overflowed the toilet and didn't know what to do, I kinda adopted the term 'momager', fixing the toilet to stop running, and getting things taken care of. The hotel decided the carpet was too wet and moved us to another room. Fortunately the toilet was actually broken and we were actually not the cause of the great flood.

For half the band, it was their first time in Vegas, so after more failed nap attempts, we explored Vegas- grabbing buffet at Main Street Station (our first meal since 6 am), walking Fremont, then driving the length of The Strip. We were wiped after being awake 35+ hours, though we still ended up staying awake in the room till about 3 am. At one point I was downstairs working on wi-fi, and when I came back up, they told me how Patrick had choked. He was vlogging the whole time, so I'll link to those when he uploads, and you'll see all of their silliness and how aerosol Easy Cheese could've killed him. 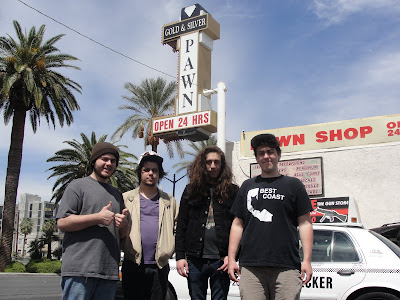 We slept solid, checked out around 1, went to the Gold & Silver Pawn Shop (of Pawn Stars fame), had a late lunch, and now it's nearly 9 pm and we're rolling through San Jacinto.

It's been a really fun trip, and what I really love is getting to know these creatures a little more deeply- Joel and his hot/cold moods (do NOT mess with him when he's hungry/tired or if he thinks he's getting sick, which is almost always)- Patrick and his constant goofball antics- Jessie, the conservative one, always a bit more collected and serious- and Brian, the sensitive one who takes the brunt of their pranks, is the first to apologize or take the blame when something goes wrong, and who doesn't have much, but will share whatever he's got. I love these kids and hope next time they hit the road that they might still have room for a momager.

More pics later when I can upload.

Sent via BlackBerry by AT&T