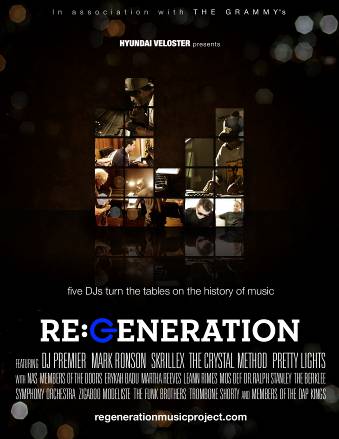 It is no secret that I tend to steer clear of electronic music. When I get email that says "remix" anywhere in the subject, they go largely unread and certainly not listened to. Chase has recently started writing about some of these things...dub and DnB and such because- I know I'm gonna sound just like my mom- but to me it all sounds the same and I don't like it. But sometimes I try. I went to IDentity Festival last year, have seen Crystal Method a grip of times, and while watching the GRAMMYS, tried to embrace that Skrillex, after performing at Petco Park last year, is probably someone to pay attention to (even if the 130bpm set rejects him as their representative.) I get that it is a cultural phenomenon and by many predictions, the future of music. Though to the initiated, that's probably like when people say "with the advent of the internet" after we've all been online for 20 years. In large parts it can be argued that is the present of music. I still believe in a voice & a guitar, but I find the culture shift fascinating nonetheless, even if I shake my head and mutter, "kids these days"...

That said, I was given the opportunity to screen a documentary called RE:GENERATION. The film is largely supported by the GRAMMYS foundation, so it is worth bearing in mind, but I found the film to be completely intriguing. The premise is this: take five producers, give them a genre to explore, have them assemble musicians within the genre and create something brand new out of something old. Mark Ronson was assigned Jazz, Pretty Lights got Country, Crystal Method got R&B/Motown, Skrillex got Rock, and my personal favorite, DJ Premier was given Classical.

The film documents the learning and exploration by each producer as they delve into their genre, scouring record stores, meeting people with expertise in the genre. While Skrillex worked with The Doors and Mark Ronson worked with Erykah Badu, Trombone Shorty, and the Dap Kings, they didn't seem to require such a stretch of imagination that it took for DJ Premier to work as an actual conductor with the Berklee School of Music or Pretty Lights trying to get Dr. Ralph Stanley to deliver a song the way he wanted. ("I'd rather just do it my way.")

The film follows the entire recording process, and in the end, the tracks are revealed, edited with studio footage and festival footage of the "live" debut, including some scenes of Skrillex at Petco Park from last fall and The Crystal Method at last summer's IDentity Festival at Cricket Wireless Amphitheater.

The film is screening in select cities, including San Diego, this Thursday, February 16 and if you're a fan of music of ANY genre, I promise this is a documentary that will open your eyes and ears.

More information and videos from all of the final songs after the jump.


Produced in association with The Grammys, the film looks at the history, songwriting and studio process of different musical genres through the eyes of five of the most influential electronic producers/DJs in music today, who write and record a brand new track with a grouping of influential collaborators in that genre. The tag line for the film is “5 DJ’s Turn the Table of the History of Music.” The stories of these five DJs are documented in RE:GENERATION.

In the film, current five-time GRAMMY®-nominated artist Skrillex heads into a Los Angeles studio with members of the iconic rock band The Doors to collaborate on a new song, “Breakn’ A Sweat.” Meanwhile, The Crystal Method touched down in Detroit to work with Martha Reeves of The Vandellas and The Funk Brothers on the R&B number “I’m Not Leaving.” Mark Ronson created a southern brew of New Orleans jazz in “A La Modeliste” that boasts a veritable all-star cast of Erykah Badu, Trombone Shorty, Mos Def, Zigaboo Modeliste and Members of The Dap Kings. DJ Premier tapped NAS and Boston's very own Berklee Symphony Orchestra for his “Regeneration,” and the documentary culminates in Nashville on the dusty, intergalactic twang of Pretty Lights' "Wayfaring Stranger" featuring vocals from LeAnn Rimes and Dr. Ralph Stanley.

Skrillex — Rock — “Breakn’ A Sweat” (with members of The Doors)