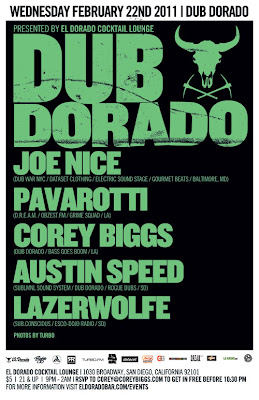 For those of you who have a minimal understanding of Dubstep and want to know more regarding the origins of the genre need to check out the documentary Bassweight.  The documentary gives great insight to the early days of Dubstep, with its origins in South London, its growth in popularity, and how it became popular in the United States.  One of the main reasons that the sound jumped across the pond is because of American Dubstep artist Joe Nice.  In the early days of Dubstep, Joe Nice hosted a Dubstep night in New York which featured a lot of the original and up and coming DJ/Producers from London and around the world.  Tonight you can catch Joe Nice at Dub Dorado and witness one of the early pioneers of the Dubstep movement in person.  Make sure to be at Dub Dorado tonight at El Dorado $5 free before 10:30 with RSVP.
Posted by Chase Goodman Esq at Wednesday, February 22, 2012