Last week was a busy one. I went to Santa Ana to see The Head and The Heart on Monday, Yucca Valley to see Blitzen Trapper at Pappy and Harriet's on Wednesday, and Jacumba on Saturday. I'll get around to posting photos from Telemagica, but first I wanted to post videos from Blitzen Trapper. 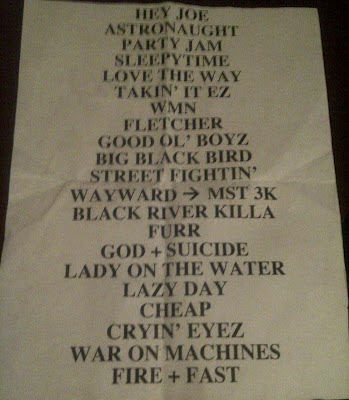 I already told you how we totally got lost on our way there so I'll spare you that story, but it wasn't nearly as far as I expected it to be. As we arrived, we ran into Marty and caught up with him for a few before going in and ordering dinner. The food was great (lots of BBQ and such on the menu) and we had great seats right up front. (Or, they were great until the guys from Palm Springs decided to stand right in front of me). The venue was just as cool as everyone said it was but since we got there when the opener was already onstage, we didn't have much chance to explore.

What I'm really excited about is that I get to announce that The Head and The Heart and Blitzen Trapper are touring together this fall (with Brian John Appleby opening) and they have a show at Spreckels on October 3. Tickets go onsale on Friday at 10 am. This is a Casbah presents show and is only $30. Save this Ticketmaster Link or save some dough by avoiding service charges if you buy tickets at the Spreckels box office.

Below is the playlist from Wednesday night. Most of the set is here.