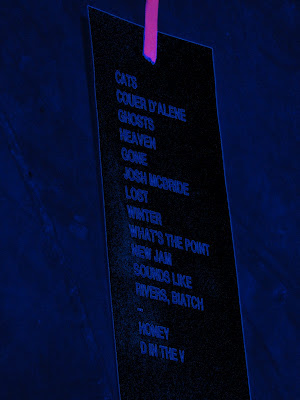 Last night, Jeff, Nate and I took a little roadtrip up to Santa Ana where The Head And The Heart, The Moondoggies, and Husky were performing at the Observatory. I told you last time that except for the crappy parking situation there, I really love this venue, and this time around was even better because we went back to the side of the stage where we were for Silversun Pickups, only this time I was literally sitting on a small partition wall with my feet on the stage. The digital lights still never read well on my camera, but I shot the whole show which you can watch below.

This is now my fifth time seeing the band (Casbah, House of Blues, Balboa Theatre, Coachella, Observatory) and they are really just phenomenal live.  There's something about 'Rivers and Roads' live that will make the hair on your neck just stand up and give you chills. At the end of high school, I remember there was this big slide show with all of these end of the year/coming of age/endless possibility songs like "These Are The Days" by 10,000 Maniacs. This song takes me back to that feeling, and by the crowd response after every time I've seen it performed, I'm definitely not the only one. Anyway, all of the videos are below in order of the setlist.

Email ThisBlogThis!Share to TwitterShare to FacebookShare to Pinterest
Labels: the head and the heart, the observatory