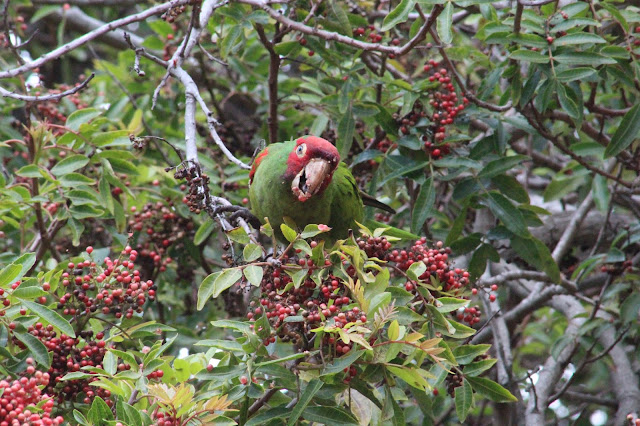 Last weekend, we checked out the San Diego Bird Festival, presented by the Audobon. The wild parrots made an appearance and made me envious of the multiple-thousand dollar lenses being showcased just inside the exhibit hall. Here are some of the things I've been watching and reading the past ccouple weeks, after the jump.

KPBS: Judge Rules Male-Only Draft Violates Constitution
Now that women serve in combat roles, it's no longer justified to exclude them from draft requirements, a federal judge ruled. The case was brought by a men's advocacy group.

I recently binged Workin' Moms on Netflix. I really like the show, it's an easy watch, and super relatable, though there's almost a defiant amount of nipples. I also binged Canadian drama Northern Rescue which I moderately enjoyed in the beginning, then kinda hatewatched just to get through the end because some of the tropes were just too much. Literally in every episode two characters will be talking an hanging out and then suddenly exclaim, "Oh, Gosh! What time is it?? I have to go, I'm so late..." which is such lazy writing.

Audiobook: Where'd You Go, Bernadette?  This is the current Book Club book with EW Radio LA Daily's Julia Cunningham. The book is being made into a motion picture. Watch the trailer here. Out August 9th, 2019, so you have plenty of time to read the book or listen to the audiobook, though it takes a lot of concentration as most of the story is told in emails and messages and letters, so you have to pay attention to the tos and froms. I would've checked out the book but the wait list was looonng. In the end, I was glad to have heard the audiobook because there's a section about the Christmas Song "Oh Holy Night" and the person singing it does an excellent job.

Read: The Stark Traffic Safety Divide - Pedestrians fatalities are rising sharply as Americans spend more time behind the wheel. And self-driving technology isn’t likely to be the fix we need.- CityLab

Many of Nova's weekends with her mom were dependent on SkateWorld, just as I loved Rollerskateland when I was her age. It inspired her to get into derby, and for a couple years, she even took figure skating lessons there. To be sure, they could stand to use a massive renovation, but screw Civic San Diego and FUCK their corruption. It especially sucks because the skating community already dealt with the blow of Mara Elliott shutting down The Dollhouse last year. (Fuck Mara Elliott, too.) The proposal will be discussed at San Diego City Council on Monday at 2pm if you can make it.
Read: Linda Vista's Skate World, you're fine, now go away; Plans for big box store - SD Reader
'Shady' Bids Could Allow Developers to Replace Historic Skateworld: Owner NBC
Effort underway to save San Diego's Skateworld  CBS

Grab a box of tissues and watch: Kitbull by Pixar