I start these little lists and stockpiles and then it's already two weeks later and the world has already moved on, so I'm posting even though some of it is already barely relevant anymore. Still, catch my read and watch list after the jump. I've got a couple more superbloom posts to get up, but in the meantime, here's a simple pic from just by the MTRP Visitor's Center. 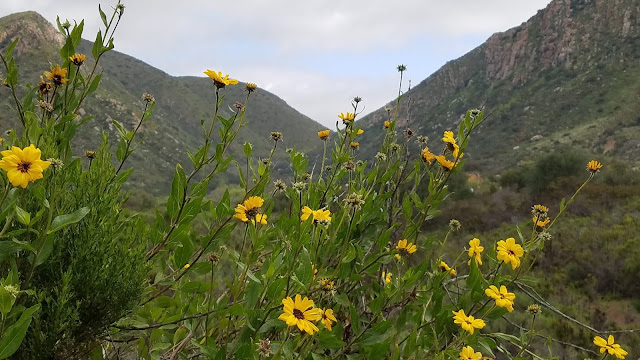 I've been absorbed in documentaries over the past couple weeks. I blasted through The Case Against Adnan Syed episodes 1-3, I watched The Inventor: Out for Blood in Silicon Valley and am now reading the book on the same topic, Bad Blood: Secrets and Lies in a Silicon Valley Startup with the LA Daily book club, and this week, I was both eye-rolling and astonished while watching Social_Animals on Netflix. It's quite eye opening, especially with an 11 year old in the house to consider and I definitely recommend it if you have tweens or teens with phones.


Speaking of parenting, I had a big fail last week. Nova's schoolwork is mostly done online, which can be especially complicated for things like math, where 1.25 and 1 1/4 and 5/4 all mean the same thing but only one version is the correct answer these online programs are looking for. So we get these reminders several times a week to "ask your student about their GoFormative" or "Check your student's progress in Khan Academy," so when I did, Nova's work was completed, but with 61% and 63%. I asked her if she was satisfied with those scores, because they're considered 'failing' at her school. The kid lost it. Anyway, this was a learning moment for me, because I was the same kind of student...I put a ton of pressure on myself to be the best, the top, the overachiever. So it lead to a lot of reading:
17 Signs You're An Overachiever - HuffPo
Field Guide To The Overachiever - Psychology Today
To The Overachiever Who Fails — A Lot - The Odyssey
Overachieving Is a Disadvantage, but It Doesn’t Have to Be - Study Breaks
The Surprising Downsides of Being an Overachiever - Lifehacker

A couple weeks ago, I watched the entire docuseries Surviving R Kelly on Lifetime, so watching The Gayle King Interview with R. Kelly was just another required watch in the madness. I've subsequently watched both parts of Leaving Neverland on HBO, and though horrifying, wasn't as surprising...I believed the victims in the '90s and I believe them now, and have forever cringed whenever an MJ song is played within earshot. It's disgusting and despicable and the people who protected him should all be in jail.


Some articles that caught my attention:
On a serious note-Facebook Bans White Nationalism and White Separatism.

And to wrap up on a lighter note, ICYMI, a mom wrote a letter to the editor of Notre Dame's newspaper and brought back The Great Legging Debate. I have definitely been on the "leggings aren't pants" side, but I'm even more on the "don't you dare tell women how they can and cannot dress, especially if it's because some fragile man doesn't know how to control himself" side of things. And the soccer mom in me has dozens of pairs of leggings that I wear when I'm running around, doing errands, or actually working out, walking, or hiking. So it's exploded and gone massive and it's kinda funny, though it reminds me how fine the line is while Nova deals with dress code and uniform issues every day.
The Legging Problem
Response to ‘The legging problem’
Leggings: Another mom’s view
In Christian Circles, the Debate Over Leggings and Female Butts Has Been Raging With Special Urgency