Wonderfront Is Coming To The Port of San Diego!! 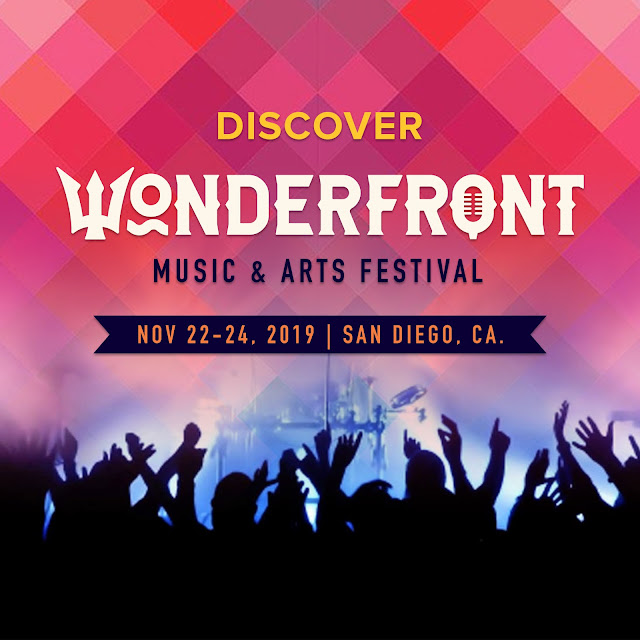 Last week, many of us woke up to a surprise when we saw George Varga's U-T announcing a new festival in San Diego. You can read  his full article here but if you're like me and can't get past the paywall, here's the SoundDiego story about the same event with info on organizers, bookers, and venues.

In a nutshell, the event will take place November 22-24th, 2019 across numerous Waterfront venues and locations with aligned after-parties, including South and North Embarcadero Parks, 5th Avenue Landing, Ruocco Park, Broadway Pier, Seaport Village and more. Organizers are also boasting a 'something-for-everyone' lineup with at least 50 acts already booked. Ticket prices will start at $225 for weekend passes, with lineup announcements expected in April and tickets available sometime in May.

Check out their official site and sign-up for their newsletter here: https://wonderfrontfestival.com

The full Wonderfront press release is after the jump:

Tuesday, March 19, 2019 — San Diego, CA — Descending upon the stunning waterfront of downtown San Diego – “where the city meets the sea” – on November 22, 23, and 24, 2019 is THE WONDERFRONT FESTIVAL, the highly-anticipated 7+ stage, 70+ band, 3-day music, culinary, and arts festival.
The brainchild of seasoned industry veterans, Paul Thornton of Tag Presents, and Ernie Hahn current GM and partner at Pechanga Arena, this event has been 8 years in the making and no stone has gone unturned in its launch. The two have more than 50 years combined experience producing events in the live entertainment industry, with deep roots and relationships in the San Diego market.

The festival will feature more than 70 musical acts on 7+ different stages, spread across the various parks and piers along the Port in downtown San Diego, from South Embarcadero up to Broadway Pier. “At most major festivals, they take you out of the city and lock you in,” says Managing Partner, Paul Thornton. “This is a complete flip of that model, where the fans will be immersed in a downtown environment, with the ability to move in and out of the festival venues to dine, shop, take a break at their hotel, visit attractions, all without leaving the festival experience.”

“This festival is going to be three days of energy and fun for residents and visitors alike that will activate our amazing waterfront like never before. It’s going to bring thousands of concertgoers that will fill our hotels, shops and restaurants while they enjoy all that San Diego has to offer,” says San Diego Mayor, Kevin Faulconer.

The musical lineup will be announced around late April with tickets expected to go on sale in early May and will include major mainstream talent, including rock, indie rock, EDM, reggae, hip hop, alternative, country and Americana, popular Latin programming, and emerging breakout artists from all genres.
In addition to a spectacular lineup, the festival will also include many experiences that celebrate a sense of discovery and fun, including music, arts, craft beer tasting, sumptuous culinary experiences, film and other cultural “festivals within a festival.”

“It’s massive. When you’re booking 70 plus bands across 7 or more stages, in addition to all the after parties we’ll be doing downtown, and the element of being on the water, with a water taxi system moving people around with performers and bars on the water, and also yacht parties. It’s so much more than just music and that’s what’s going to make the experience so unique. We will have amazing food and drinks, games and activities, waterfront dining, art installations, street performers and theater groups.

There’s a lot of work to this but the experience is going to be unparalleled,” according to Paul Thornton who has been actively booking top tier and emerging talent for the event.

“This is really special for me because a big part of the Gaslamp Quarter developing was my grandfather and my father with Horton Plaza,” says Managing Partner, Ernie Hahn. “And that really started the development of what we know as downtown to this day. At the end of the day, this is a festival put on by San Diegans for San Diego first. We want to create the best festival in the world that San Diegans love that involves all the genres and represents the makeup of what San Diego is. We’ve locked down the best festival site in the world and plan to deliver an incredible music festival experience unlike any other.”

“Music, art, food and fun connects and inspires us all. The Port of San Diego welcomes the Wonderfront Festival to our dynamic San Diego Bay waterfront, where there’s always something different to discover, experience and enjoy,” says Port of San Diego Chairman Garry Bonelli.