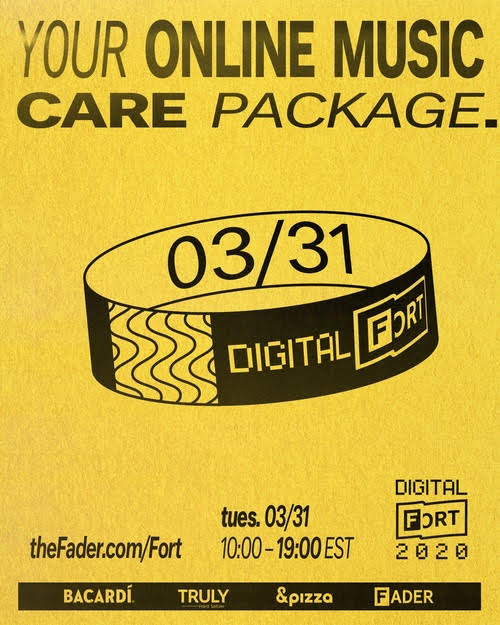 The Fader Fort is one of the hotspots of SXSW every year, and since the festival was obviously canceled this year, The Fader has decided the show must go on, virtually, of course. Tune in to their link here. Videos will only be live for 24 hours, so check it out sooner rather than later.

(Update: due to popular demand, the live stream has expanded to two days. Check after the jump for full lineup.)

Full press release after the jump:


Each year, Austin’s SXSW draws hundreds of thousands of visitors from across the globe – and many share the same goal: Score a pass to get into FADER FORT.

This year, however, Austin cancelled SXSW amid an increasing number of speaker and company withdrawals, as well as public health concerns due to the spread of COVID-19 – now a worldwide pandemic.

Devastated by the festival’s cancellation, globally renowned brand, The FADER, has decided to take the typically invite-only FADER FORT to a digital platform, with a day-long broadcast from 7 a.m. to 4 p.m. (PST) on Tuesday, March 31.
The FADER FORT Digital broadcast, which is sponsored by BACARDÍ®, TRULY Hard Seltzer and &pizza, will feature over 40 exclusive, curated performances provided by both emerging and acclaimed artists. These artists join The FADER in this broadcast as an opportunity to raise money for various charities that focus on helping the city and people of Austin, as well as musicians and the entertainment industry on the whole during this global crisis.

“FADER FORT always brings people together,” says Jon Cohen, FADER Co-Founder and Co-CEO. “For 17 years FADER FORT was built around the love and support we were always shown from local music fans in Austin and NYC, including an incredible team of hard-working people who work behind the scenes to bring it to life. With the global live music industry and our adopted home of Austin Texas in need, we are hoping that by taking FADER FORT digital we can add some brightness and financial support in these challenging times.”
"Music unites us, even if we can’t physically be together in the same space,” Cohen continues. “We thank all of the artists who have supported us and ask their fans and our FADER audience to please donate and support those in need where they can”.
FADER FORT has been a platform for musical discovery, often launching the careers of artists who perform at the event.  Viewers can expect this to be a fun and crazy mixed bag of fresh exclusive content from fan favorites. Kesha will premiere a never before released first cut of the intro to her "My Crazy Beautiful Life" documentary, Guapdad 4000 will give fans a cooking demo as Gordon Scamsey in a “Cooking with Flava” segment, plus spectators can watch Ashnikko (who was going to perform a surprise after-hours set at FADER FORT this year) sing along to her hit single “Tantrum” as she’s getting waxed and a rare one time only performance from the recent Drake collaborator and R&B's latest crooner on the rise Giveon.  In addition, Phantogram will provide viewers with a personalized message, while drill rapper G Herbo will take the audience behind the scenes from his recent tour.  Plus, in typical FADER FORT fashion, we can expect some very special last-minute guests to be announced. will viewers with a rare exclusive performance

Just like any other live festival performance, artists will have designated performance slots that will be accessible on a dedicated web page along with a direct link to the artist’s chosen charity. Visitors to the digital Fort are encouraged to make donations. All performances will be available for 24 hours only at www.thefader.com/fort.

In previous years, FADER FORT has hosted surprise and scheduled performances by Drake, Cardi B, Kanye West, Diddy, Lil’ Wayne, Kendrick Lamar, A$AP Rocky, and other notable acts – often before they became household names.
With the nation now on lockdown, The FADER, along with dozens of musicians have come together to bring FADER FORT to your living room. Don’t miss this highly anticipated, one-time digital broadcast event.