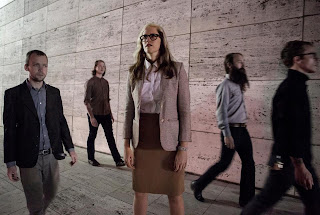 If the upcoming election goes as the experts predict, we might not know the results for some time. What better distraction than live music this Tuesday night. Once again, the nice folks at Sezio are presenting quite a lineup downtown at the intimate Luce Loft. Headlining will be Minneapolis five piece indie rockers Dark Dark Dark. Touring in support of the bands third full length, Who Needs Who, founding members Nona Marie Invie (vocals, piano) and Marshall LaCount (banjo, vocals) have primarily rendered what is a recurring theme, that of the breakup album. It is interesting to note the group has moved forward so I suppose love does not always conquer all. The power of this album is clearly evident from the outset, with Nina's smooth vocals overpowering (but not in a bad way) the music itself. The result is a well balanced effort which flows evenly from beginning to end. I profess to never having seen Dark Dark Dark perform live, so feel free to journey downtown for a pleasurable night of music. This is an early show (7:30) so plan accordingly. Tickets can be purchased here.

I would be remiss if I failed to mention the opener, the eccentrically wonderful Emily Wells, who is also touring to promote her most recent album.

Watch a video of Tell Me below.