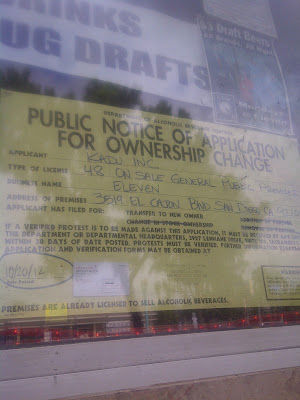 Back in early August, I was at the Soda Bar and overheard a friend say that Eleven had been sold. I tweeted something like "Just overheard Eleven got sold?" My friend requested that I delete the tweet though just hours later said it really didn't matter, he was friends with Alex Kacha and she said it was cool to openly talk about. Unfortunately a friend at Eleven disagreed and I got my ass chewed out for being a rumor mongering jerk. In fact, for about 12 minutes as he yelled at me, I was technically 86ed from the bar for life. Fortunately the whole thing settled down, traces of my Tweet were long gone, andfor the past 3 months have kept my mouth shut, despite many of my industry colleagues telling me that the bar had been up for sale for over a year and it was suggested that Scot Blair is just more interested in focusing on his beer bars and not running a music venue.

On October 20 the "public notice for ownership change" went up and yes, it has taken me this long to write about, though there's nothing really to talk about. The buyers, KADU, Inc, is a hybrid of the last names  Alex Kacha & Neil Dutta. I don't know Neil or Alex, but you've definitely seen Alex out at the cooler shows in town with her camera in hand. Peter Holslin covered the sale in last week's CityBeat and points out that Alex plans to keep things "pretty much...the same". Kelsey Breunig has been booking there the past few month in addition to booking by Zeke, and rumor is that Mario Orduno will also be booking nights under the new owners.

Being that Eleven is the closest cool bar to my house, I hope things truly stay "pretty much the same" and my part of El Cajon Boulevard doesn't get neglected from future Drinkabouts or Craft Beer events.