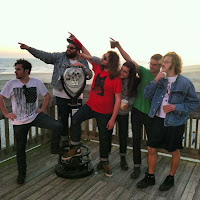 Let me start by making a statement before going any further. Diarrhea Planet, the youthful pop punk band from Nashville, are a must see when they play in your city. I realize many are put off by the rather awkward band name, but then again, it is only a name. When this bunch of crazed (in a good way) lads last played San Diego I forgot about the name and clearly focused on the mayhem occurring on stage. Five guitars (incl. a bass) were being played in a variety of angles and positions. The overall effect was mesmerizing, and I was disappointed when the all too short set came to its conclusion. Well, skeptics, this time the Planeteers(?) are touring with a new album under their belts. I'm Rich Beyond Your Wildest Dreams was released last month and is the latest installment in the ongoing punk legacy of the Nashville band. The songs are immediate without being over the top, which would not in itself be a bad thing. Therein lies the secret of their success, this is a band that is having a good time, and what is wrong with that? Absolutely nothing, I must admit.

Join the fun on Friday at Soda Bar. You won't regret it. Heck, you might even buy a t shirt bearing their name. The So So Glos will be headlining, making this a great night of music for your ears and eyes.

Watch a video of Separations from Diarrhea Planet below.

Email ThisBlogThis!Share to TwitterShare to FacebookShare to Pinterest
Labels: Diarrhea Planet, Soda Bar, The So So Glos