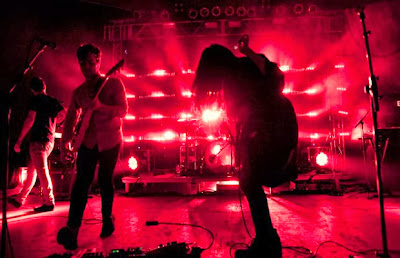 Short notice, but if you were fortunate enough to grab a ticket to The Naked And Famous show at House of Blues tomorrow night, you are most certainly in store for a visual and aural treat.  More from Big Hassle:

Beyond a life hardwired to pop culture via the 24 hour news feed, The Naked And Famous elicit a romantic connection inspired by the golden era of alternative rock; a shared response to a teenage soundtrack of epic, emotionally charged mid nineties music.
Released in March 2011, their ambitious debut Passive Me, Aggressive You featured the singles, ‘Young Blood’ and ‘Punching In A Dream’. Lauded by the NME, it was “A classic case of lovely and beautiful: TNAF’s passive melodicism and aggressive innovation clash in a dazzling blaze of psych/sonic fireworks” and Rolling Stone magazine described Young Blood as one of the year’s “best singles”.
Fronted by Alisa Xayalith and Thom Powers, The Naked and Famous lit a fire under an online fan base, with a video subculture built through YouTube and into radio. M83 invited TNAF to remix a single and a Tiesto remix transformed ‘Young Blood’ into a club smash. Agencies fell into The Naked and Famous slipstream, and theirs became the go-to soundtrack for gaming, Hollywood and TV shows mining a zeitgeist of young and interesting.


Tix are still to be found on Craigslist and other such second-hand sellers.  If you can get your mitts on one, guaranteed it'll be worth the price you pay.  Openers NO and The Colourist kick things off promptly at 8pm.  Hope to see you there!
Posted by Nate Vandermeulen at Tuesday, September 24, 2013

Email ThisBlogThis!Share to TwitterShare to FacebookShare to Pinterest
Labels: House of Blues, the naked and famous