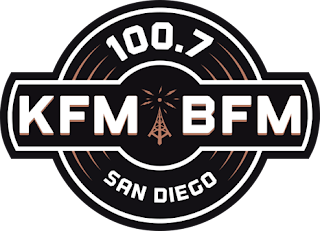 As you may or may not recall, a few weeks back 100.7 Jack-FM announced that Garett Michaels would be returning to the San Diego market as Program Director of the station. This also happened shortly after Midwest and LMA, the group behind 91X, combined promotional and sales forces (kind of), and then they announced the station would be taking a new format, for which we've been  patiently waiting. Today, it was revealed.

For background info, check out this piece on SoundDiego and this one in the Reader and my little blurb from last month.

From this day forward, the station will be known again as 100.7 KFM-BFM (with the pause after the first M). They kicked off with history of the spot on the dial, then played a promo with snippets of Led Zeppelin, The Clash, Green Day, INXS, Guns n Roses, Nirvana, The Cars, White Stripes, and AC/DC with tag lines like "True Variety That Rocks" and "We play whatever, whenever." They kicked off the new format with Rush into The Ramones to Pearl Jam to Modern English into The Who, and Midnight Oil. (Then Tom Petty, The Black Keys, AC/DC, Foo Fighters). This is a dad rock station for your dad bod to chill in your man cave. Don't expect to hear many (any?) female artists on this format aside from maybe some tokens like Joan Jett, Blondie, or The Pretenders.

So there you have it. Let's see how it goes and grows. You can find the station online at KFMBFM.com.