I like to think that I pay attention to music trends, but as each year passes and bands come through the Observatory, I realize I'm just not in the loop with genres out of my wheelhouse. Bag Raiders is one of those bands that completely escaped my radar until they were booked and look, you're not getting a suddenly new me, but the jams are positive, and kinda remind me of old 70s and 80s dance grooves I'd hear my parents listen to as a very, very young child. Think a modern spin that harkens back to Earth Wind and Fire, Nile Rodgers, but with a modern spin that will get a dancefloor moving. And I'm certainly all for bands that create electronic music with live instruments. Some listening links are below, but if you just want to buy tickets, grab them here.

Bag Raiders perform on Friday, February 19 at the Observatory North Park.
This is an all ages show with doors at 7pm. (All ages shows have an 11pm curfew) 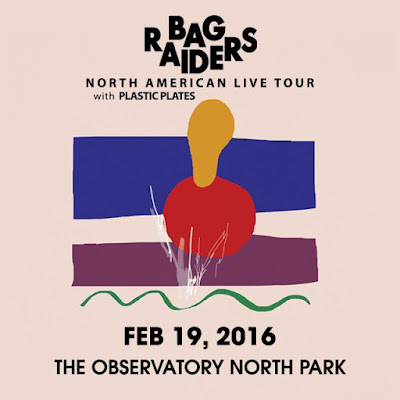 
(From Bag Raiders Press Release)
It’s been a minute since their last transmission, but the chakras are finally aligned for the return of Bag Raiders. Amassing a stack of music since we last heard from them in 2010, the LA transplants (via Australia) christen their comeback with the release of a second EP of premium cuts, Friend Inside, released worldwide December 11.

Friend Inside features a triple dose of infectious and radiant electronic pop that dances across the spectrum, from positive to chilling to downright ecstatic. Friend Inside follows on from the Waterfalls EP that was released earlier
​in 2015 to great acclaim with all three of the tracks (Waterfalls, Vapour Trails, and Wonderland) landing in the TOP 10 on Hype Machine’s Popular Chart and marked the comeback of Bag Raiders, who originally broke in 2010 with their certified GOLD self-titled debut album, an ARIA-nominated affair that included mega-hit “Shooting Stars”, “Way Back Home” and “Sunlight”.

Bag Raiders also broke ground last ​summer selling out their live show debut in Los Angeles, San Francisco, and New York. The live show eschews the tides of current trends and exists in a world firmly of its own making. Having always opted for instruments over computers, the show doesn’t abandon the dancefloor, but rather applies the Bag Raiders’ production nous and musical chops to a much broader sound palette featuring live guitar, bass, keys, drums, and vocals.
Posted by Rosemary Bystrak at Thursday, February 18, 2016