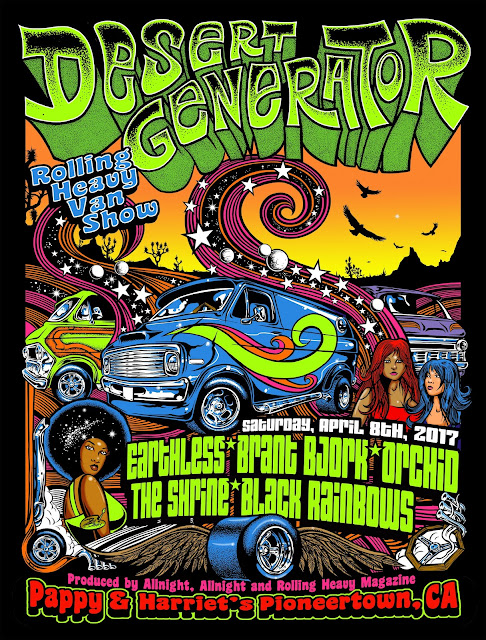 I'm trying to work through all of these festivals, and being that this one is relatively close and features San Diego's own Earthless, I thought it was worthy of sharing. Full press release after the jump.

March 30, 2017 – Los Angeles, CA – Southern California’s most anticipated music and auto show, DESERT GENERATOR, will return to Pappy & Harriet’s in Pioneertown, CA on April 8th. Produced by Rolling Heavy Magazine, Allnight Allnight and founding Kyuss member Brant Bjork, the festival will expand upon last year’s sold out show to include the popular Rolling Heavy Van Show, which is expected to draw vanners from across the country, and performances by Earthless, Brant Bjork, Orchid, The Shrine and Black Rainbows. Tickets are on sale now here.

Last year thousands of van enthusiasts and rock music fans descended upon Pioneertown, CA to celebrate the first year of one of North America’s only music and custom van events, DESERT GENERATOR. Inspired by the legendary “generator parties” that made famous the seminal desert rock band Kyuss, and the campouts of the historic custom van craze of the 1970’s, DESERT GENERATOR celebrates free spirits, rock and roll, custom vans, fun times & a fat dose of that bitchin American lifestyle that brings this all to a head in the beautiful California desert.

The festivities begin on Friday evening, April 7th with a party called “Stoned & Dusted” that pays tribute to the desert shows of the early 90’s with full band performances by Mario Lalli and his band Yawning Man, Brant Bjork, Nick Oliveri (ex-Queens of the Stone Age, Kyuss) and special guest Sean Wheeler (from Throw Rag) and the mighty Fu Manchu. The event will be held at an undisclosed location in the high desert. A very limited number of tickets will be available through the Desert Generator website. Ticket holders will hang out, break bread and enjoy cold beverages with the bands before the music begins. This once in a lifetime event is the real thing, a party that can only happen with these desert rock legends and only in this desert.

DESERT GENERATOR kicks off on Saturday, April 8th with the Rolling Heavy Van Show taking place between 12:00PM and 4:00PM at the Pioneertown Corrals Campground. Trophies will be awarded to winners in best van categories. There will also be a Riding Easy Records Van Jams Contest and DJ’s spinning classic rock/metal.

The show show continues the night of August 8th with performances by Earthless, Brant Bjork, Orchid, The Shrine and Black Rainbows.

Artwork for this years official DESERT GENERATOR poster was created by legendary artist Dirty Donny who is best known for his work with Metallica, classic black light posters, pinball machines and his recent art book “Pinball Wizards and Blacklight Destroyers.” Pick up a copy of his book now at http://www.jsrdirect.com/webstores/dirtydonny.