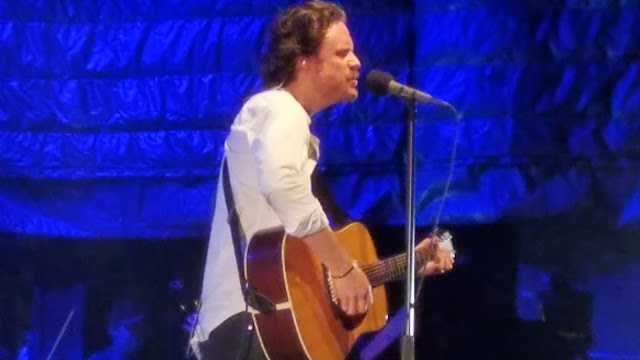 It has been quite a lovely week though I can't really believe the first week of Nova's spring break is over so quickly. On Monday I pulled off a double header, catching of Montreal at Music Box then Kristin Kontrol at the Hideout. On Tuesday we went to Magic Mountain until our insides were sufficiently mixed up. On Wednesday, we spent the afternoon at CostCo where Darren got me this new laptop, which I've been spending way too much time setting up and getting back all of my things the way I like them, but I love it nonetheless. That night, Pyles picked me up early to hit Bali Hai mai tais before going to Father John Misty at Humphrey's Concerts (no photo pass, thus the grainy phone photo). The show was amazing though I still hate that the venue uses Elite. Afterward, we tried to catch Grace Mitchell at Casbah, but she had just finished, so we stayed long enough for Birdy Bardot before Tim Fears and I caught the end of Grande Ole Office. Thursday was pretty much a computer day and soccer evening. So here we are on Friday. We're heading to Balboa Park to catch The Midnight Pine at Panama 66, but most likely we'll lay low this weekend, watching "Couchella" on YouTube or listening on Sirius XM. I'll be working at POND on Saturday and we're planning on going to see Little Dragon on Sunday and Local Natives on Monday. It's also my sister's birthday and we'll probably have a family gathering for Eastra, too. Hope you all have a great weekend!! Friday through Sunday archives are after the jump.