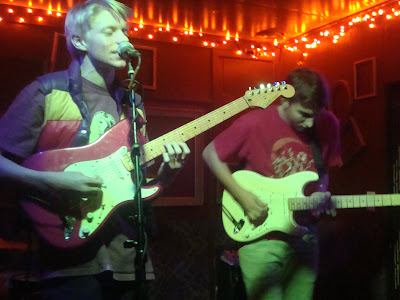 I started this post a couple weeks ago and didn't realize I never got around to finishing. Sorry for that. I have been laying uber low (read:being lazy) during the holidays. On Friday (12/17) night I went to M-Theory for Fitz & The Tantrums, then went to The Pastorela at the Lyceum downtown (which was a great performance despite the asshole usher who treated us like shit), and finally got dropped off to catch Dirty Gold's debut performance at Tin Can.

When I arrived, the boys were outside with family and friends waiting to play. The three are all in high school and I have to admit that after all this time with the blog and stuff, I assume they've never heard of this site and I prefer to just hang out and do my thing and check them out so I didn't introduce myself. I just made sure I got a seat up close to capture the performance and take it in. For anyone who hasn't heard, the band has caught some blog love nationally and before even playing publicly, they were picked up by Aquarium Drunkard's Autumn Tone label. The band also got a great write-up on Crawdaddy. The show wasn't without it's bumps, and after playing two songs with vocals cutting in and out, Sarah asked them to wait, she changed the mic channel, and had them start their set all over again from the beginning, much to the pleasure of the crowd.

After the short set, and before the band could be ushered out of the 21+ bar, they were flooded with family and friends posing with them for photos on the stage, and you could here teachers and parents and friends all discussing their associations with the band. It was really cute, actually, and the boys were beaming, as they should be. I imagine you'll be hearing a lot from Dirty Gold and will have plenty of chances to see them in 2011. Below is their full set. You can click the right or left arrows to navigate the YouTube playlist. 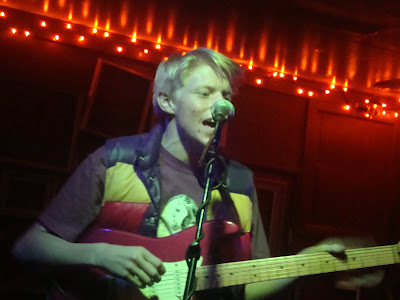