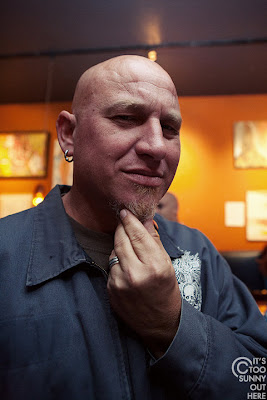 It's been a while since I posted any newsy bits, and since I don't have a lot of time before I hit two Christmas parties and at least one show, I'll keep it brief.

First, congratulations to my dear friend and colleague Tim Pyles (photo by Natalie Kardos) for being named the 2010 SubModern Host of The Year for his "FTP" show on FM 94/9. We all know he rocks, but it's nice for FMQB to take note and spread the word among the radio world. It would be super awesome if his show was syndicated to other stations, dontcha think?

A couple weeks ago, I posted about O'Connell's being sold. Apparently that report was premature and at the last minute, the buyers dropped out, so for now, O'Connell's is still O'Connell's. As they'd planned on moving on, there were no shows booked for December, so if you want or need a show in December, you might wanna hit them up.

Other tidbits- The Styletones will no longer have a Monday residency at Bar Pink come 2011. Though they'll still be all over town, those Mondays became a ritual for manyso be sure to catch them before the year ends. ** Word on the street is that Dirty Sweet has called it quits. With a long history in the San Diego music scene, I suspect they'll find new outlets down the road. **CityBeat reports this week that Seth Combs new venture will be a lifestyle site call GFYSanDiego. Presumably "Go Fuck Yourself", and with SDGossipScene closing up shop and heading to New York, I can already feel the target on my back from my favorite frenemy. Best of luck to Seth.