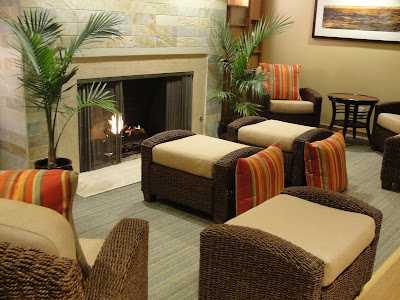 Last week, I got an email inviting me to a spa opening. I was definitely intrigued since it's not something I get to cover often. I wasn't sure I'd find a way to get to Del Mar on a Tuesday at 4:30, but over the weekend I heard from my friend Steve, a guy who will go on for hours about health supplements, alpha-biotics, the genotype diet, and the tragedy of the pharmaceutical industry, the FDA, and the dangers of gluten, processed foods, and high fructose corn syrup, and asked if he'd like to spend the evening at a holistic spa. Naturally, he agreed.


Spa Na'Mara is located at the Best Western Stratford Inn in Del Mar. From what I understand, the entire hotel has new ownership and has undergone some room renovations and will renovate the hotel's exterior, but the first major change is the opening of the spa. We were immediately greeted by the hotel and spa owners and managers and front desk receptionists and made to feel welcome. We could walk ourselves through or get a tour if we wished, but we opted to wander since the space isn't especially large.

The spa itself was formed out of a block of poolside rooms. The interiors of the rooms are warm, with bamboo like wallpaper in earth tones and mellow (but not cloying) music playing throughout the rooms on the intercom system. There's a mani-pedi room (with the most amazing pedi chair I've ever seen), a few massage treatment rooms including a double room for couples massages, and a miscellaneous room for other services like waxing, spray tans, etc. The bathroom has a shower and separate toilet stall, with brushes, blowdryers, and other amenities for post spa grooming. (For more, click 'keep on reading') 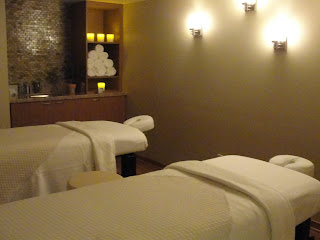 Each treatment room has glass double doors that lead to the pool, but you never feel a lack of privacy. After a glass of wine and some nibbles on the tray passed appetizers (bruschetta, chicken canape, seared ahi on wonton crisps), I was asked if I'd like a mini-facial. I've been to events where they say there will be free services, but there's some sign up sheet with 25 people more important than you already signed up, or you feel like you have to beg. Not here. I went into the first treatment room and after getting partially disrobed and comfortable on the amazing contoured massage table, was treated to an amazing facial by Julie G. She's not actually with Spa Na'Mara, but she works for Phytomer (warning: the site has sound that doesn't turn off), the marine-based products used in the spa, and it's her job to train estheticians how to properly use them. Basically I was in the hands of a master. Besides not doing extractions (the really gross part of any facial), I don't know what made this "mini" because I was treated to steam, masks, and some serious (but ultra lightweight) moisturizing. Julie was awesome and we chatted the whole time. I even gave her a little social media 101. It was the least I could do. I'm not sure if I was actually glowing when all was said and done, but I felt (and still feel, nearly 8 hours later) amazing.

I rejoined Steve who had a massage. "How was it?," I asked. "Painful." Steve has thrashed his body over the years and he explained that his "painful" response wasn't a bad thing, just very intense. I signed up immediately for a massage. 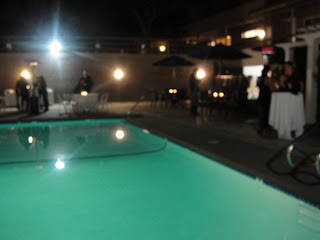 As we awaited more treatments, we sat around the pool, had some more wine, and enjoyed a nice simple spread of fresh fruits and cheeses. I might have been a little too excited when I saw that the cheeses were Humboldt Fog, Manchego, and a delicious bleu. It really doesn't take much to make me happy.

We nibbled until everyone was asked to hear Ciara Lydon discuss five ways to stay stress free during the holiday season. She's a Holistic Health Counselor specializing as a "weightloss coach and wardrobe therapist". While I had to laugh a little (if you've seen my wardrobe I don't have to tell you why), she was clearly well-versed in her areas of expertise. If you're a new year's resolution type person or are looking for help with weightloss, healthy eating, or even just dressing best for your shape, Ciara has a "New Year New You" Tele-seminar and virtual group nutrition program kicking off in 2011. Check her site for info and program details.

I was called in for my massage and I could tell that Stanly Namoa (who floats between Spa Na'Mara and The Valencia- same owners) was a great massage therapist, but I could also tell he was taking it easy on me. Still, laying on the table and just getting my shoulders and back worked on, even briefly, felt amazing. 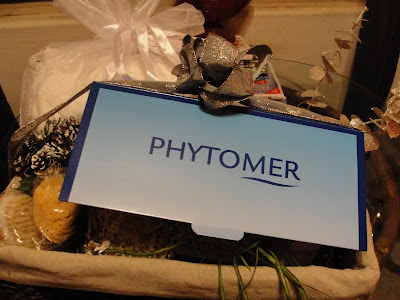 After my massage, I sat by an outdoor heater by the pool while sipping my glass of wine until we were called in for a raffle. There were two door prizes. They drew the first winner and she claimed her prize. As they drew for the second prize, I saw it and I wanted it so bad. "254". Darn. I was holding 256. Nobody claimed it. "we'll draw again. You have to be here to win." I like those rules. "302". No winner. In my head I stared at the bowl with the raffle tickets. I thought of "The Secret", and though I've never read it or seen the movie, the idea of focusing energy on something you want to manifest isn't exactly that hard to grasp. In my head I repeated 2-5-6, 2-5-6, thinking I really wanted that prize. "256". I won! The gift basket had a facial set of Phytomer products, a body brush and natural sponge, and a Boca Terry bathrobe.

The crowd thinned out, but we still had a little time to get quick basic manicures (moisturize, clean and clip cuticles, shine) from Master Esthetician Laurie Womack. As we enjoyed the hot tea provided, the spa cleared. We were handed our swag bags and were on our way.

I haven't been to many spas around San Diego, but in my limited experience, I'd say Spa Na'Mara is definitely worth checking out and their pricing is pretty standard for the industry. To celebrate the opening, you can get $50 off any 80 minute spa service or $25 off any 50 minute service through April 30, 2011 (with some blackout dates) or indulge in some of their special spa therapies like a Lavendar Bolus Massage, the signature mani/pedi, an organic facial, or a tone & tighten body wrap.

Spa Na'Mara at the Stratford Inn Del Mar is located at 710 Camino Del Mar and can be reached by calling 858.356.0307 for information and appointments.
Posted by Rosemary Bystrak at Wednesday, December 08, 2010