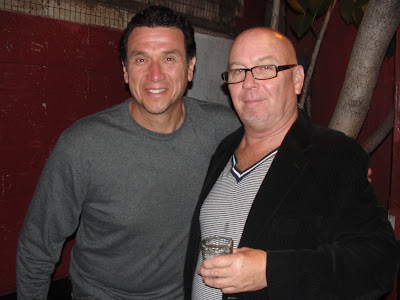 It feels like I've been reporting nothing but bad news lately, so it feels really great to be able to share some good news for a change. Bob Bennett (pictured on the right with Albert Preciado), one of the Casbah owners whom we all know and love as "Uncle Bob", has fought his cancer, and at this point it looks like he's won. He was diagnosed with prostate cancer last year while he was also recovering from a knee injury after slipping down his stairs. It looked pretty rough for a while, but after 9 weeks of radiation at a grueling 5 days a week, Bob's cancer numbers went from 12.5 to 2. He has been cleared by his doctors and won't have to return for a checkup for six months. Bob attributes his health and success to early detection. And of course, as Bob does, he made a joke about masturbation. "They gave me the choice of cutting or radiation. When they cut, you're not allowed to, you know, but with radiation it is encouraged." Congratulations to Uncle Bob. You are so loved and we look forward to many more years of your dirty humor.

Hi Rosemary, I know this was posted a few years ago but hopefully you'll see this. My name is Jackie Bennett, Bob is my actual uncle, but being traditional Bennett's we don't know each other. Is there any way to pass this on to him? I don't have anything profound to say, I'm just curious. Thanks!