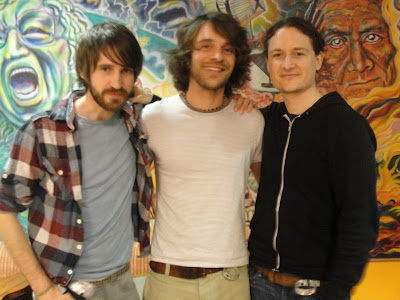 Here's a little story. Chris Cantore called me earlier this week and said that KPRI had an opportunity for a last minute private listener concert with a huge international band and if I had any ideas where they could play. They were thinking Lestat's, Claire de Lune and a couple other venues. When he told me it was One eskimO, I told him I would help call around and see what was available. Unfortunately, certain venues aren't known for their speedy replies, so though we had a couple backup plans, the station contacted Liz at The Loft and made it happen. As usual, I went early to make sure I shot photos and videos, and it was also arranged that I'd meet the band before the show. I thought I'd have either Bob Hughes from KPRI or Chris Cantore on behalf of the station and SoundDiego do the interview and just film. I was on a day full of meetings and three hours of sleep. Generally a cameraphobe anyway, I did not want to be on camera or behind it doing another disastrous interview.

Kristian was sick, but Adam, Jamie, and Pete convinced me that we should do an interview and volunteered to interview themselves, which to me was the best 10 minutes of video I've probably ever shot.

Bob ended up showing up, as did Marc Balanky, who shoots video for SoundDiego, so the need for my interview for NBC or KPRI dissolved, so I decided to post it as is, raw and uncut. Because Kristian was sick, you can tell that Pete and Jaime were incredibly nervous, so they're both pretty vocally quiet in most of these videos, but as it was probably something that won't happen again, here are all of the videos. Click the right and left buttons to navigate through the playlist. Take the time to watch them in HD.

Huge thanks to Liz at The Loft, Bob, Chris, Haley, Magi, and Christina at KPRI, Marc, and especially to Pete, Jaime, and Adam for being such great sports. Hope you feel better soon, Kristian! (Check SoundDiego.com next week for more of my photos. I'm like my own little multimedia channel and shot photos with my right hand as I filmed with my left. )
Posted by Rosemary Bystrak at Saturday, January 29, 2011

Email ThisBlogThis!Share to TwitterShare to FacebookShare to Pinterest
Labels: kpri, one eskimo, shangri-la, the loft

Wow what a bunch of talented lads! Thanks for posting.