This Saturday: Meet Some Intense Individuals at Brick By Brick

[The event, photos, video and writeup below were provided by my friend Greg Gibson. Anything to help you achieve your maximum intensity.- rosey]

When was the last time you saw Colonel Sanders waltz on stage with a bucket of KFC's best and dance the sweet dance of victory with Boy George and Simone from Pee-Wee's Playhouse, while two unassuming Mormon Sister-Wives watched in disgust? I'm guessing never. This is the kind of thing that happens at The Intense Individual Party, an annual costume party for charity thrown by San Diego writer and producer, Lisa Comrie. Every year, more than two hundred people show up - in costume, in character, and INTENSE.

Since it's inception in 2002, the party has seen everything from Bob Ross painting enormous happy trees on canvas to an entire cloister of nuns arriving in a limo to The Abbey in Banker's Hill and chanting from the balcony. Every year, people seem to take their costumes, their in-character performances, and most importantly, their creativity, to the next level for this unbelievable night. 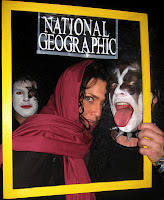 At face value, The Intense Individual Party could be described as an outrageously fun party where you can dress and act like the intensely awesome celebrity, politician, character, or friend who you've been admiring and/or imitating for years. Honestly, though, it's so much more than that. At its core, this night is really about giving people a chance to express their individuality and creativity in a way they might not be able to otherwise. Lisa Comrie started blogging about intense individuals in 2005 as a way to document the intensity she saw happening everywhere around her. Intense Individuals is about looking at the world through a different lens, finding the intensity in both extraordinary and everyday events and people. Last, but certainly not least, proceeds from The Intense Individual Party go to the L.A. chapter of Dave Eggers' wonderful nonprofit tutoring, writing, and publishing organization, 826, whose goal is to assist students ages six to eighteen with their writing skills, and to help teachers get their classes excited about writing. Rad!!

The Intense Individual Party takes place at Brick by Brick this Saturday (01/29) at 8PM. Tickets are $20 at the door. So get your costumes ready, click the flyer for the event below to RSVP on Pingg, and make sure to watch the INTENSE video invite for this year's party featuring a very special guest! Visit http://www.intenseindividuals.com/ or http://www.facebook.com/intenseindividuals for more info.

Email ThisBlogThis!Share to TwitterShare to FacebookShare to Pinterest
Labels: brick by brick, intense individuals, san diego events, things to do in san diego