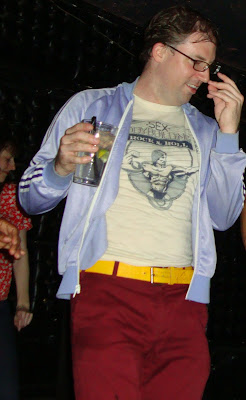 I'm not ready to write this. I had a crazy fun (sober) night doing things I never thought with a my new friends before Nima takes off on his Baja bike adventure. What started with a simple plan to work on his blog turned into several hours and several stops when we decided to finish things up at Gay Denny's at nearly 5am where I ran into Nick. I said hi and he somberly delivered horrible news. Justin Jay had passed away. I was buzzing from too much coffee and the high of the night's adventures and the words didn't really sink in. I still don't think they have. I still don't know what to say and as the sun begins to rise I feel completely numb.

You probably know Justin. His epic drumming in bands like Hialeah and Boyscout showed his talent, and seeing his face at the Casbah on any given night of the week after he'd get off work, belly up to the bar ordering his tall double sapphire and whatever, was always a pleasure. He worked for Bertrand's up until a couple weeks ago, and his late hours were such that it wasn't uncommon for me to get a midnight text asking if the bands were still on at the Casbah or if they were any good. I always greeted Justin with a big smacker right on the lips and the same for goodbyes and I always told him I loved him. He was just one of those people that everybody loved. 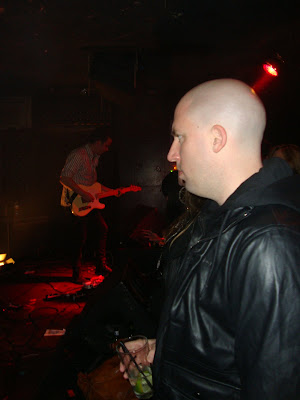 Free-spirited but also intense, and if anything was ever wrong, you wouldn't know it because he'd either be smiling or just say, "Fuck it." On one particularly shitty night, I'd been wandering downtown and missed the last bus when Justin invited me up to the Turf Club. In a matter of minutes, my night went from complete shit to an absolute blast. That's how things always went with Justin.


There are so many amazing things to say about Justin but I just really feel like nothing I could write will do justice to someone so loved and so loving. The world will be a whole lot dimmer without Justin around. Sadly, a cause of death is unknown at this time. Apparently, he had been complaining about a sharp headache on Wednesday and that was the last anyone heard from him. After a few days (it wasn't uncommon to not hear from him), concerned friends forced entry to his apartment where they found him. There is no doubt that the Black Box and San Diego music community will honor Justin's life and I will post details of services as they become available.

I created a page for Justin at 1000Memories, if anyone would like to contribute and share. I posted more thoughts on Facebook, but if you'd like to read them and avoid the space of face, click 'keep on reading' below. Keep in mind, this was intended to be a completely stand alone post, so apologies that it doesn't quite flow from the rest of this post.


The Blessing/Curse of Social Media

Last year I had my first facebook birthday. I mean, I've been on facebook for some time now, along with twitter and myspace and the blog and all of it, but this year was the first year I experienced the happy birthday wall phenomenon of having nearly 200 messages from people wishing me a happy birthday. It's a very weird feeling. Do I thank everyone individually? Does the simplicity and ease of posting on a wall make it less of a wish than say, a phone call or a card or an email or a text message? It felt great to feel loved, but there's still a fuzzy weirdness about it...a dullness, if you will.

Today has me thinking about this because as I found out the news about Justin Jay this morning, at 5 am at a Denny's, no less, where I bumped into Nick who broke the news, I couldn't get through the shock. I wanted to cry but couldn't. I was thinking about it a bit with Stimy the past couple weeks, too. While I was immensely touched by Stimy's music, we didn't know each other on a personal level. What responsibility do I have as a local music blogger to write about his passing? Even harder, what right do I have to, in many cases, be the one publicly sharing information about someone I didn't know.

In this morning's case, however, I am a music blogger, true, but Justin was also a great friend. I loved that boy so much as did so many, but as everyone is stunned and shocked to hear of the news, how painful is it to find out such things on Facebook? Or on Twitter? Or on a blog? I posted a blog, then pulled it down in case family still needed notification, but seeing that the news was out, put it back up, still feeling like it is not my right to share such personal news but wanting to answer the emails and texts I'd already received. We write tributes, we make posts on the deceased's wall, posts that person will never see, but that the friends and family left behind will share and read and laugh about and cry about. We do these things to comfort ourselves and to comfort each other, but with this permanent documentation on the interwebs, are we softening the blow? We can still look at Justin's photos and feel like he's still here, still present, like we'll still see him at the next show ordering his double sapphire, or like we'll still get that midnight text wondering where the after party is gonna be, or the funny comments posted on our inane status updates. We're all brought together by this immense sadness, seeing just how deeply and widely this person touched so many, yet we're all apart, staring blankly at our computer screens, left to make sense of it in our own ways.

No doubt Justin will be missed and there is a huge hole in my heart and the hearts of many with such a sudden and unexpected loss. It's a blessing and a curse that the way will feel it together is on facebook.
Posted by Rosemary Bystrak at Sunday, January 09, 2011

I am so saddened that I am at a total loss to fully communicate it at this time. If ever. Thank you for the news, as tragic as it is. RIP Justin Jay. Rock On Forever!

This is such a huge loss and so sad. Justin was a great drummer, and a huge supporter of the art. I can't believe he's gone