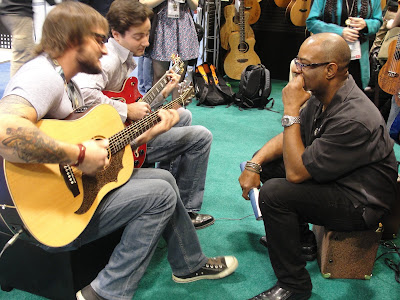 Sometimes life is about being in the right place at the right time. When I met some guys at a True Blood party at Comic-con 2009, a friendship was sprung that has lasted over time and some of my best times ever are from hanging with them at the Con. Last year they told me about a company they were developing and over time they wanted to pick my brain about some things. I had forgotten about the conversation until last week, when a group of us were at the Everest show at the Belly Up. We had a cocktail party before and had try to convince Jesse LaMonaca to come to the show; as it turned out his buddy had an extra ticket. We were all enjoying the show when I got a text from Jared asking if I wanted to come to NAMM and I was welcome to bring a guest. By the time the night was through, plans solidified, and by Friday morning, Jesse and I were driving up to Anaheim. After a few hours at the convention center, I stepped outside and got to chatting with a man who turned out to be an artist rep for Luna Guitars. I shared what I do with him and mentioned Jesse. Long story short, we were asked to come back by and take a look at some guitars, which turned into an impromptu performance at the Luna booth. Jesse and Brandon played two songs. Here is one of them.