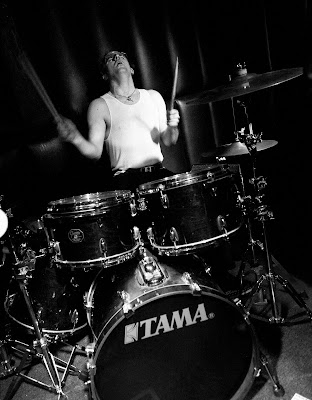 Justin Jay's passing last week was a shock for everyone. The autopsy came back and Justin died from Bacterial Meningitis, which caused a seizure and killed him instantly. Justin had been experiencing a headache and a fever. Anyone experiencing similar symptoms urgently need to be tested.

There have been talks about a benefit and now one has been confirmed. The Casbah show on January 21st was already in place on the calendar, but the show will now be a tribute and memorial for Justin. The show features Transfer, New Mexico, and d/wolves. Doors will open early at 7:30pm with the first band starting at 8:30. The show is $14 in advance or $15 the night of the show. Get your tickets here. When the show ends around 11:30, there will be a dance party. It's included in the ticket price, or you'll be able to come in after Transfer for $5 (based on space and capacity), with proceeds going to Justin's family to defray expenses.

Thanks to everyone who has contributed to the 1000memories webpage. It is easy to see the web of love that surrounded Justin in his life.

Thanks to Michael Klayman for providing such lovely photos.
Posted by Rosemary Bystrak at Monday, January 17, 2011